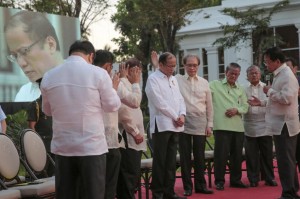 President Aquino is prayed over by leaders of evangelical Christian groups after a gathering and dialogue at the Malacañang Palace in Manila on Monday. Aquino answered questions on various issues, including the Mamasapano incident which he said he is not to be blamed. (MNS photo)

Ejercito said Aquino preempted the submission of the report of the Philippine National Police-Board of Inquiry (BOI) – which is set on Thursday – when he publicly blamed relieved Special Action Force chief Director Getulio Napeñas Jr. for the supposed errors in the implementation of Oplan Exodus.

“It put the Board of Inquiry in an awkward position as it just announced it was asking for an extension yesterday morning, then Aquino preempted by narrating his account of the Mamasapano incident extricating himself and putting the blame on Napeñas,” Ejercito said.

Ejercito said it was hard to believe that Napeñas fooled Aquino when the President was with the top police and military brass, as well as top officials of the security departments, at the time of the mission.

For her part, Senator Grace Poe, who led the Senate investigation on the same issue, expressed disappointment over the BOI’s failure to submit its report on Monday as it earlier promised.

Poe, however, does not want to link the deferment on the submission of BOI report to Aquino’s speech, which happened on Monday afternoon. She said the BOI can just use Aquino’s statement in their report since the body was not able to interview him.

Meanwhile, Senator Francis Escudero believes Aquino did not intend to put the blame on Napeñas.

“PNoy, I guess, was simply narrating his account of the Mamasapano massacre and did not intend to simply pin Napeñas as that is not his function but, rather, that of the investigative and/or fact-finding bodies,” he added.

Hours before Aquino made the statement, BOI chief Director Benjamin Magalong said he will submit the report on Thursday.

The report was originally scheduled to be submitted by the end of February, but was deferred to March 6. Last week, it was announced that the report would be submitted, Monday, March 9.

Magalong also said that resigned PNP chief Director Alan Purisima refused to be interviewed by the BOI. The BOI also expressed intentions to interview the Aquino but did not receive a reply from the Office of the President. (MNS)