It is indeed unfortunate and sad to think that the once “vibrant” City of Tacloban which according to the 2010 Census had a population of 221,174 and was dubbed the “economic center in the Eastern Visayas region,” and one of the fastest growing cities in the Philippines,”  is now in ruins due to the havoc brought by Typhoon Yolanda recently.

According to reports, it wasn’t the swift wind that blew but the surge of ocean waters that went through the town of Tacloban. One such report from a certain Marvin Xanth Geronimo sent to me by a former SJC high school classmate, Eloisa Franco- Diaz said: “amidst the combined media offensive locally and internationally, here is his first-hand account. You be the judge; this person just survived the Typhoon.”

This person wrote: “I won’t be posting my whole experience as there’s always some people who think they know better. But I do want to make things clear, so all of you would have an idea of what it was really like being there. “ 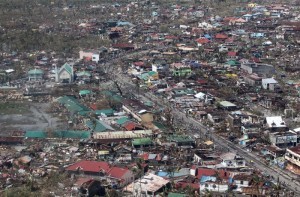 Aerial shot of the province of Leyte to personally assess the extent of damage brought by Super Typhoon Yolanda (Haiyan) on Sunday (November 10, 2013). Typhoon Yolanda, the world’s most powerful typhoon in 2013, packing more than 300kph when it made landfall in Central Visayas Friday morning. (Photo by:Ryan Lim / Malacanang Photo bureau)

1. “Tacloban prepared for Yolanda. To claim that they (the local and provincial government) weren’t prepared was only because of the large number of casualties, is a bit disappointing.  They had families already relocated in designated evacuation centers, even before the storm came; it was just sad that those places (the evacuation centers) were destroyed as well. “

2. “Don’t go on thinking that you know better by saying that they (the local people) should have left the seaside. I’m not entirely sure but even near the heart of the City, there were sandwiched cars and my guess was that the cars were enveloped when the ocean water surged.”

3. Step down your high horse from time to time. Don’t be so quick to judge the looters. I was one of them. I looted medicine from the Philippine National Red Cross, milk and food for the children. Walked four hours and dug a two- feet hole, using a plastic bottle, to get some water to drink and be able to bring back some. The same people who looted for the flat screened TV’s were the ones who offered me sodas to drink and vegetables to eat. Those who looked like ex-convicts also offered me food to eat. Almost all the time, these people were the ones willing to give a helping hand when you tell them you really need something to live on. What wasn’t shown on the news was how our kababayans helped each other amidst the catastrophe.”

4. Politicians and TV personalities, majority of them were just there “grandstanding.”  I saw DILG Secretary Mar Roxas but didn’t see him nor his nor his bodyguards helped in retrieving families trapped in the cottages, nor they assisted in helping the wounded. They were in their hotels looking clean and tidy, as if they couldn’t be bothered. I saw newscaster Ted Failon ate a hearty meal while children around him barely had anything to eat, slept on cold floors while he slept on a comfy bed.”

5. “It might look like chaos, which was what the news wanted to show the world, but there were police patrols. I personally went to a police station to ask regarding rumors of hostility, but they told me to that they never received any such reports and that they were just doing their job. Their (the police patrols) manpower were spread so thin primarily because some of them have also died.”

Finally, he said “ I am not an expert on dealing with calamities like this, but I just want you all to know what I had experienced and why I survived.”

Like a breath of fresh air, another letter sent to me by another SJC alumna and a media colleague from PTV4, Fe Ramirez-Casumbal was from a lady named Geraldine Uy Wong and she wrote: ‘I am a private citizen who had just arrived from Tacloban, after I successfully pulled out my relatives. Now safely back in Manila, I read and heard comments criticizing  the DSWD (Department of Social Welfare) and I feel that this is quite unfair. We are all guilty of judging the government, but I was there in Tacloban to see for myself how the people of DSWD worked. Beside her in the command post, I witnessed how DSWD Secretary Dinky Soliman marshaled her task force to address the enormous job ahead of her, which my mind couldn’t even grasp. Tirelessly, she championed everyone to keep going, even as the morale was evidently low, as she herself went through her never-ending list of to-do’s 24 hours, which seemed not enough for all the things to be done. Yet, through all these, she was gracious and her presence was reassuring and she has the steady look and smile, which seemed to tell you something: we will not stop working because many people need our help. I ask everyone to please give the government a chance. If you receive an email or a post criticizing the government agencies or other departments, please think twice before you share, forward or like. Instead, I.m asking you to go to the nearest DSWD relief center and offer to help with donations or volunteer for repacking operations. The government is really doing its best. It will be even more efficient if the private sector pools its resources together to support our national operation of “bayanihan,” in order to help our countrymen through this unimaginable calamity. I hope you can share my message, so everyone can be encouraged to help.”

Though the wrath of Typhoon Yolanda has brought us both sadness and desperation, it has nonetheless brought us unity and togetherness in the face of tragedy. Let us all pause for a moment and hope that like the pliant bamboo, we Filipinos are resilient and can strive to bring back the beauty of our country and its people.