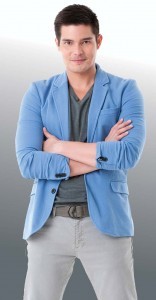 Dingdong, one of the country’s most sought-after leading men who is blessed not just with bountiful talents but also with the heart for pursuing his many advocacies, will portray the role of Father Kokoy Evangelista.

Aside from having the complete package of good looks, humor, warmth, and wisdom, Father Kokoy is also admired for his virtuous principles in life. A go-to person in times of problems, Kokoy is the kind of friend who unconditionally offers a shoulder to lean on. He is the ideal guy, a Mr. Right, and the man any woman would like to introduce to her parents. But here’s the catch: Kokoy is a priest.

Father Kokoy, better known as Pari Koy, is a priest who is known for his non-traditional and non-conformist ways of bringing people closer to God, doing whatever it takes to show that it is cool to believe. But his own faith will be put to the test when he is assigned in the parish of Barangay Pinagpala and starts to deal with the people of the community.

Set in a contemporary barangay, stellar performances will be delivered by some of the country’s respected and talented artists including Sunshine Dizon as Noemi, the secretary of the parish in Pinagpala who remains to be optimistic despite being maltreated by her husband; Chanda Romero as Martha, the self-righteous leader of the lay workers in the parish of Pinagpala who is against the unconventional ways of Father Kokoy; Luz Valdez as Esther, one of the lay workers in the parish who loves to talk about gossips and rumors; and Dexter Doria as Salome, also a lay worker who loyally serves in the parish despite being teased by Martha and Esther.

Father Kokoy will also be challenged to put his faith into action as he meets the people of Barangay Pinagpala – with Gabby Eigenmann as Jude, the influential and corrupt chairman of Barangay Pinagpala; Rap Fernandez as Sol, the right-hand person of Jude, who helps him with his illegal schemes; JC Tiuseco as Timo, the irresponsible brother of Noemi; and Carlo Gonzales as Simon, the abusive husband of Noemi who fails to provide for his family.

Completing the cast are GMA Artist Center’s homegrown talents led by Jillian Ward as Sarah, the loving daughter of Noemi; Jeric Gonzales as Eli, the son of Salome who thinks that going to the parish is uncool; Lindsay De Vera as Ava, the charming grandchild of Martha who will fall in love with Eli; Hiro Peralta as Sam, the closet homosexual brother of Father Kokoy; and David Remo as Pinggoy, the high-spirited “village’s son” of Barangay Pinagpala.

How will Father Kokoy bring the people of Barangay Pinagpala closer to God? Will he be successful in instigating change in the community? Or will his faith and perspectives in life be moved by the people around him?

At the helm of this primetime series is the award-winning director Maryo J. Delos Reyes. After the successful run of the primetime series Niño, GMA takes pride in having him as the director of Pari Koy as he is known not only for tackling social relevance but for uplifting the human spirit and evoking hope through his masterpieces.

To see your favorite Kapuso shows on GMA Pinoy TV, GMA Life TV and GMA News TV International, check the airing schedules in your territory through the website www.gmanetwork.com/international/programguide.