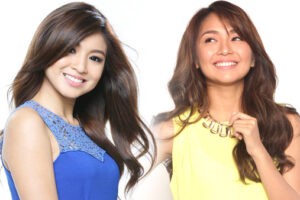 Teen stars Kathryn Bernardo and Nadine Lustre were finally introduced to each other formally recently.

The two young stars met face to face during rehearsals for their respective numbers on “ASAP.”

In a post on the official Instagram account of the variety show, Bernardo and Lustre can be seen posing side by side along with Julia Barretto.

Another photo of them was again uploaded on “ASAP’s” account after their opening production number.

In a past interview, Bernardo admitted there exists “some kind of awkwardness” between her and Lustre because a lot of people are constantly comparing them.

Bernardo also once said she would like to get to know Lustre more, and maybe even hang out with her in the future.

Since Lustre rose to fame in last year’s “Diary ng Panget,” not a few have commented that she and Bernardo look alike.

Moreover, Bernardo’s team-up with Padilla is also being compared to the tandem of Lustre and James Reid.

Despite this, Lustre had shrugged off comparisons, pointing out that she and Reid are just starting out and still have much to prove.

Diether Ocampo not paying his workers?

Shaina on John Lloyd: No reason for us to talk