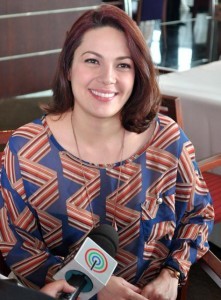 admitting that she has a long-time crush on suitor Paulo Avelino, KC Concepcion said she is taking her time before entering into a new relationship.

Concepcion said she no longer can afford to go through another heartbreak.

Explaining that she doesn’t want to pressure herself, Concepcion added: “Nandun na rin ako sa point na you want to make sure na you end up with someone who fits like a glove. I’m still giving it time.”

Concepcion, however, maintained that Avelino is continuously exerting effort to win her heart.

Concepcion is currently in the Philippines while on vacation from her studies in New York, where she is taking up advanced acting classes in the Big Apple to further improve her craft.

Concepcion said her acting awards here in the Philippines pushed her to learn more about being an actress.

Concepcion was recently named by the Philippine Movie Press Club as the Best Actress for her performance in the movie “Boy Golden.” (MNS)

Chiz: Heart and I are okay