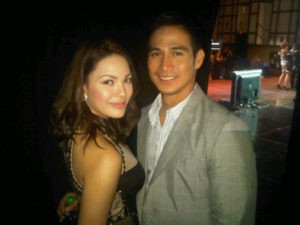 MANILA (Mabuhay) — KC Concepcion made peace with ex-boyfriend Piolo Pascual in London over the weekend, almost four years after their acrimonious split.

The actress made the announcement during a Twitter chat with her followers while she was on a train from London to Paris. She and Piolo are currently touring Europe with several ABS-CBN stars for the Sunday noontime variety show “ASAP”.

KC responded with a respectful “opo” (yes) punctuated by a smiley and posted a photo of the former sweethearts snuggling up to each other in a restaurant in London.

She did not elaborate but the post was well appreciated by her fans, eliciting 336 retweets and getting favorited 1,066 times as of this posting.

KC and Piolo officially became a couple on October 21, 2010 after getting close while working on the 2009 remake of the Korean soap opera “Lovers in Paris”. The romance fizzled after a year.

In an emotional taped interview with Boy Abunda on “The Buzz”, which aired on November 27, 2011, she admitted the split but was vague about the reason. However, her tears betrayed her pain and hinted at neglect and incompatibility.

She also made subsequent cryptic statements that revived old rumors about his sexuality.

Barely two months after going public with their breakup, KC stunned the public with a sexy magazine cover in which she held a sculpture of a man’s decapitated head. (MNS)

White on the outside, brown on the inside

Claudine has positive message for Raymart