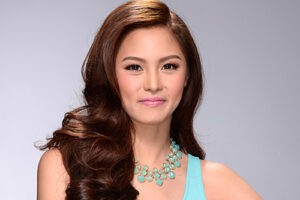 Kim Chiu revealed that a former boyfriend cheated on her.

On Sunday’s episode of “Gandang Gabi Vice,” the “Etiquette for Mistresses” star was asked by comedian Vice Ganda if she was pertaining to then leading man and her only ex-boyfriend, actor Gerald Anderson.

Chiu said that even though she went through tough times, she realized that things will eventually get better.

When asked if her ex-boyfriend’s new girl is prettier than her, Chiu reiterated the importance of beauty from within.

In the end, the actress has only this to say: “Kung saan siya masaya doon na lang tayo. It’s part of growing up—the pain.”

Chiu and Anderson became a couple after joining “Pinoy Big Brother Teen Edition” in 2006. They broke up in 2010.

Anderson’s next relationship was with Maja Salvador, who had a publicized rift with Chiu over the actor.

No wedding bells yet for Richard, Sarah