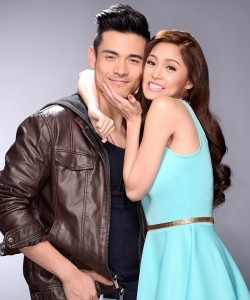 MANILA (Mabuhay) — Although they have already done two movies together, not to mention several TV dramas and even live shows, actress Kim Chiu still finds it “refreshing” to be working again with onscreen leading man Xian Lim.

After honing their chemistry in teleseryes like “My Binondo Girl” and “Ina Kapatid Anak,” the rumored couple took their partnership to the big screen with the hits “Bakit Hindi Ka Crush Ng Crush Mo?,” which was released in July 2013, and the even bigger follow-up “Bride for Rent” just last January.

After that, Chiu was given a new leading man, Coco Martin, for the recently concluded primetime ratings bonanza, “Ikaw Lamang.”

Before shooting started on “Past Tense,” Chiu noted that both she and Lim were busy with their respective concert tours abroad.

Chiu is hoping that their fans will once again show their support fo0r their upcoming movie.

The actress once again credited their love team’s success to their loyal fans and supporters.

Released under Star Cinema, “Past Tense” opens in theaters nationwide on November 26. (MNS)