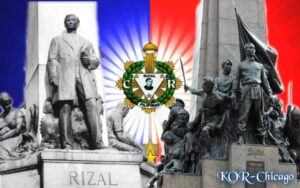 The Knights of Rizal-Historic Filipinotown (HFT) announced on November 15, 2015 that will hold the first ever Rizal Memorial Essay Writing Contest for 2015. In California.

Rules of the Contest:

Those who are interested to join the contest must submit their entries at KOR-HFT c/o People’s CORE at 1610 Beverly Blvd. Suite No. 2, Los Angeles .California, 90026.

They must submit their entries in two separate envelop and must contain 1,500 words, double spaced with their assumed name or coded number.

The theme of the contest is: IF RIZAL WAS IN HISTORIC FILIPINOTOWN, HOW WILL HE ENVISION THE DEVELOPMENT OF THE AREA?

This process is to maintain the impartiality of the judges. The entries will be safeguarded by the KOR-HFT officials and will be held for safekeeping.

The prizes for the Rizal Memorial Writing Contest will be:

For more information about the contest please call at (213)241-0995or email us at agarcia@peopelscore.net.