A horde of media practitioners from Southern California descended on the grounds of Knott’s Berry Farm in Buena Park Wednesday for the opportunity to be the first to experience the thrill of putting a battle against mechanical sea monsters at its newest attraction “Voyage to the Iron Reef” which took a year to assemble.

On May 15, newest attraction will open to the public in what is California’s oldest theme park built in the 1920s. The four and a half minute ride, long enough to engage the senses of the theme park guests, will test their mettle in blastering into pieces menacing fishes, eels, octopi and more which look more formidable with  guests donning 3-D glasses to add to the experience. 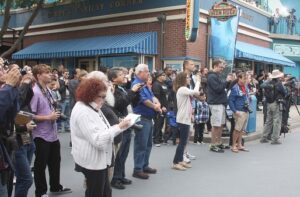 Voyage to the Iron Reef, which comes on the heels of the successful reopening of the log ride and mine ride is the answer of the park management to the public clamor to replace the space occupied by another attraction, the Kingdom of the Dinosaurs, which has seen its days, according to one of the executives.

A ride transports guests to a long screen, the longest of which measures 69 feet, to battle sea creatures with blasters. Initial reactions from those who tried the ride were favorable compared with other parks, which ranked “Iron Reef as more exciting and more intense and the blasters with better aims”.

In nutshell, the newest interactive 4-D rides will submerge Knott’s Berry Farm’s guest on “a thrilling journey into the depths of the Boardwalk to fight the Kraken Queen and save the park from being doomed”.

Mothers Day at CCF: Mothers of Cornerstone Christian Fellowship of Orange County, a Filipino-American church based in Fullerton joined the mothers nationwide in commemorating Mothers Day with a “Tea Party” in their honor.

The spectacular new interactive 4-D ride features ten interactive scenes filled with menacing sea creatures and many hidden surprises that react to the accuracy of the freeze blasters controlled by the guests on board.  Every rider earns a score, which makes every trip to the Iron Reef a competitive, repeatable adventure.

Voyage to the Iron Reef is a result of a creative partnership between Knott’s and Montreal-based Triotech.

More than 40 high definition projectors on screens up to 69’ long bring the Iron Reef to life.

Knott’s Berry Farm sits on a 160-acre real estate on a former berry farm established by Walter Knott, Cordelia Knott and their family which around 1920 sold berries, berry preserves and pies from roadside stand along State Route 39.

The place became famous for its fried chicken dinners served in a tea room in the property and soon more shops and other attractions were built over the years. Knott’s Berry Farm added Camp Snoopy which began its association with Peanuts characters.

Asian Americans rapidly on the move