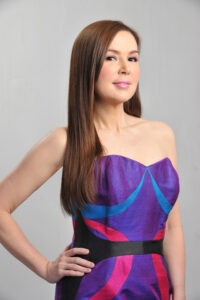 CRISTINA Gonzales is making a movie comeback in “Yolanda,” a drama about three women affected by the killer typhoon that hit Tacloban on November 8, 2013. It’ll be directed by U.S.-based filmmaker Gregorio Vicuna. She revealed this to us when we visited Tacloban for their annual Sangyaw Festival in honor of the fiesta of the Sto. Niño de Tacloban.

“I will play the mom of a teenage girl na semi-retarded,” she says. “She’ll go missing during the typhoon and I will search for her. The other two women are played by Kate Coseteng (a councilor in Valenzuela) and Gwen Pang (Philippine Red Cross secretary). We’ll start shooting next month but magwo-workshop muna kami. I’m excited but kinakabahan kasi matagal na kong hindi umarte. My last movie was in 1987 pa, ‘Bakit Iisa ang Pag-ibig’, with the late Mark Gil and director Danny Zialcita. Ang tagal na. I agreed to do it because it’s set and will be shot in Tacloban. And also it offers an intimate look at what the people experience because of Yolanda.”

A year and a half after Yolanda, Tacloban is back on its feet. There are still tell tales of destruction in some ruined houses and buildings  that were not repaired, but as a whole, most of the edifices have been renovated and repainted. It was Tacloban’s town fiesta on June 30 and they decided to celebrate it this year, unlike last year when everything was so simple as the people are still reeling from the disaster and they focused more on rebuilding the city. The theme of the fiesta now is focusing on Tacloban’s being a resilient city.

“Since then, you see a lot of new businesses being put up,” says Cristina aka Kring Kring. “Mas dumami ang restaurants, hotels at ang dami ring foreign tourists visiting us which help  boost the city’s economy. This year’s festivities will also help boost the psyche of our traumatized people, telling them to move on and leave the past behind so we can all have a more positive outlook in life and move forward. That’s why we continued with our search for Miss Tacloban and Ms. Rina Pineda won the title and with the annual parade where 20 schools and barangays participated with their own floats and contingents of dancing people in very colorful costumes. We’re almost back to normal.”

She is in her last term as councilor. Is it true that people are asking her to run for mayor since her husband Mayor Alfred Romualdez’ term is also ending after nine years of serving the people of Tacloban? “I’m still thinking about it. Alfred himself is telling me to run, so I can continue with all the projects and improvements he did as mayor. But we’ll see. Sa October pa naman ang filing ng candidacy so I have four months to discern and decide. I also want to push better programs for disaster management and risk reduction kasi naliligid kami ng dagat and we’re in the Pacific Ring of fire, so it’s better if everyone is well-prepared to make sure there will be lesser casualties when disaster strikes.”

What can he say about Raymond Romualdez (the son of Mayor Alfred from a past relationship who she also considers her own since he was still a little boy when she married his dad) who just broke up with Gwen Zamora then with Ellen Adarna?

“Well, my son is good looking, an eligible bachelor, kaya marami talagang nagkakagusto. But I don’t meddle with his love affairs. I’ve met both of them and Gwen is really nice and sweet. But whoever Raymond loves will be lucky as he’s really a good boy and I just want the best woman for him. Ang joke nga namin sa kanya, idol kasi niya ang daddy niya kaya ang gusto niyang maging girlfriend, artista rin like me. But he’s only 27 and I don’t he’s really serious with any girl at this point kasi busy rin siya with the businesses he manages.” (MNS)