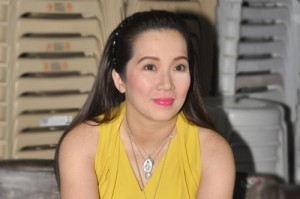 MANILA (Mabuhay) — Host-actress Kris Aquino announced during her television show that she is willing to sacrifice her love life for her children.

Aquino believes that she has to sacrifice something to “get something good from God.”

“Ito honest ha, kasi iniisip ko, sige for you to get something good from God, kailangan mayroon kang ready i-sacrifice. Tapos naisip ko, in fairness sa akin, I did a good job with the two boys, parang behaved sila and hindi sila mga brat and all.

Aquino has denied having any “secret relationship,” dismissing rumors that she is dating Brazilian model Daniel Matsunaga, celebrity chef JP Anglo, and a doctor.

Last year, the actress-host said she believes she will find “true love” in 2013.

Currently, Aquino is a proud stage mom to Bimby, who is now doing his debut film, “My Little Bossings,” with child star Ryzza Mae Dizon and veteran comedian Vic Sotto.(MNS)

Bianca shares how she deals with pregnancy