Kuh Ledesma: Revisiting the past, laying claim to the future 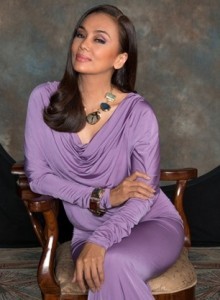 Kuh Ledesma, one of the more iconic singers of her generation with over 20 studio albums to her name, acknowledged that there are more talented singers today than before.

Still, she believes talents like herself can hold a candle to the best of them today. “Siguro may mga tao na hindi nakarinig ng songs namin before pero I believe na there’s still a market for our kind of music,” Ledesma said.

Ledesma started her music career with the band Lastiko in her hometown of Bacolod. Later she went to Manila and joined Music & Magic. The rest is history.

Ledesma divulged that she is planning to write a book about her music career but that might have to wait. “Marami pa kasi akong gustong gawin. So, ’yung book hindi ko pa alam kung matatapos this year,” she said.

After 35 years, Ledesma will reunite with Music & Magic for a concert to be held on Oct. 3 at the PICC Plenary Hall in Pasay City.

Ledesma is thankful for the chance to work with old friends. She shared that the concert is not merely about nostalgia.

Music & Magic took a break from performing in 1986. Ledesma explained that everyone wanted to branch out.

“More doors were opening up for us individually… we wanted to try new things,” she said.

After the band’s dissolution, Montelibano, Pangilinan, Elizalde and Pedero ventured into promoting concerts and managing artists; de los Reyes and Caparas migrated to the US; Gentica went into producing commercials and other entertainment projects; while Mendoza played Mendoza played drums for the band 8-Track. Of course, Ledesma went on to enjoy a solo career that included several movie appearances.

Ledesma said she is grateful to be part of a band that she considers her “second family.”

“Napakabait ng Panginoon kasi He brought this band to my life. The group helped ignite my music career,” she said. (MNS)

Jake Cuenca opens up on split with girlfriend