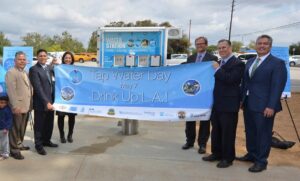 In many parts of the world, access to clean, safe drinking water is a luxury, but one that many people in Los Angeles may take for granted. No single factor has been as important to the establishment and growth of Los Angeles as water. Tap Water Day LA reminds us all of the importance clean drinking water plays in our lives and that our city’s complex planning, treatment and monitoring infrastructure should be a focal point of our civic pride.

“I commend the Department of Water and Power and Recreation and Parks for spearheading Tap Water Day. LADWP works hard to ensure our drinking water meets EPA health-based standards and the Safe Drinking Water Act, which safeguards tap water,” said Deputy Mayor Barbara Romero. “At home, we hardly give it a thought as we turn on our faucets, but as the drought continues and our population grows, it is important for people to use our drinking water resources wisely and not waste them.”

“Every day, LADWP delivers 550 million gallons of the highest quality water at the lowest possible cost to our 4 million customers in LA,” said Albert Gastelum, LADWP Director of Water Quality. “We want the public to know that our drinking water is protected by hundreds of employees who manage our treatment processes, operate and maintain our treatment facilities and vigilantly monitor and test the water we serve.”

The new drinking water stations unveiled today will be placed in a variety of locations in all of the council districts throughout the city where residents can fill up their reusable water bottles with clean, cool, refreshing drinking water. Free reusable water bottles were distributed to the public at the event for a ‘Water Toast’ celebrating the many benefits of pure, clean refreshing tap water.

“Tap Water Day is a call to action to remind us to trust, drink and celebrate the tap and be a champion of local drinking fountains” said Evelyn Wendel, Founding Director, WeTap.

The fountains not only provide drinking water for residents, but also serve as symbols of the expansive system supplying water, which includes a state-of-the-art filtration plant, 2 aqueducts, 3 groundwater treatment facilities, dozens of treatment stations, 78 pumping stations, 114 tanks and reservoirs, 421 pressure regulator stations, and 500 miles of trunklines and a 7,200 mile network of distribution pipes.

Today’s celebration also serves to highlight the importance of using our vital water resources for drinking and sustaining life, not for water-intensive landscapes. Tap Water Day LA also seeks to expand awareness and the need for greater sustainability in terms of weaning the public off one-use plastic bottles that have an adverse effect on our environment. On average, the U.S. purchases and consumes over 50 billion plastic bottles a year with only 40 percent being recycled. Bottling and long distance shipping can increase the cost and result in unnecessary increases in carbon emissions. The cost of bottled water runs about $1.22 a gallon. On average LADWP drinking water costs 2 cents per gallon.

Drinking tap water out of reusable cups or bottles means better health for residents, especially children who are more susceptible to sugary drinks and higher rates of obesity.

“Many residents invest their family budget into plastic bottled water when pure, clean drinking water from their very own tap is a better choice for their children and the environment,” said Dr. Jeffrey Gunzenhauser, Interim Health Officer, Los Angeles County Department of Public Health. “Tap Water Day LA helps to correct these misconceptions.”

Early in the city’s history, the Los Angeles River was the only source of water. It was distributed in open ditches and later in wooden or cast iron pipes. In 1902, the City of Los Angeles purchased the Los Angeles City Water Company, a private company that would eventually become LADWP. With the unprecedented growth in the early 1900s, city leaders had the vision to construct and complete the Los Angeles Aqueduct in 1913 to deliver pristine snowmelt runoff from the Owens Valley, over 200 miles away.

In 1928, LA joined with other cities to form the Metropolitan Water District of Southern California, a water wholesaler that brings in additional water supplies from the Colorado River and Northern California. In 1970 the second Los Angeles Aqueduct was completed to meet growing water needs. Today LADWP is the largest municipally owned and operated retail water utility in the country, serving a population of about 4 million residents and an area of 464 square miles.