Lakers and The Mavs keep it civil before playoff meeting 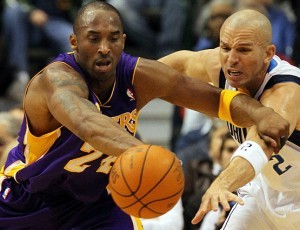 EL SEGUNDO, Calif. (AP)â€”Although they had quite a combustible meeting last month, the Los Angeles Lakers and the Dallas Mavericks claim the clubsâ€™ first playoff meeting in 23 years is too important for any thuggish, boorish behavior.

Matt Barnes(notes) has already been there, done that, and got the T-shirt.

The Lakers forwardâ€™s sportswear company is selling shirts generated out of the clubsâ€™ ejection-plagued meeting on March 31, but he realizes neither team can waste time shoving anybody around in the postseason.

â€œWeâ€™re not worried about anything that happened in the past,â€ said Barnes, who was tossed from that game after a physical confrontation with Jason Terry(notes), who clobbered Steve Blake(notes) with a hard foul. â€œIâ€™m not carrying anything over. Iâ€™m not trying to get into trouble or technical fouls or hurt my team in any way. Weâ€™re going out there to try to win, play hard. Thatâ€™s the only chance any team has to beat us, to play harder.â€

Dallas is the second-seeded Lakersâ€™ highest-seeded remaining road block to their fourth straight NBA finals, and the Mavericks have a combination of inside toughness and depth that could play well against Los Angelesâ€™ weaknesses. The Lakers rarely hesitate to get physical when necessary, and the New Orleans Hornets reacted poorly to that postseason toughness in the first roundâ€”a mistake the Mavs insist they wonâ€™t make.

â€œYouâ€™ve just got to know what youâ€™re there for,â€ Dallas big man Brendan Haywood(notes) said. â€œYou canâ€™t get suckered into any fake tough-guy stuff, or pushing and shoving. Youâ€™ve got to go out there and do your job, stand your ground.â€

The clubsâ€™ leaders have kept the peace so farâ€”even if it might be paining them. Phil Jackson and Mark Cuban are two of the best needlers in basketball, but the Lakersâ€™ 11-time champion coach and the Mavericksâ€™ billionaire owner kept their barbs to themselves over the weekend.

Jackson was full of praise for the Mavericksâ€™ consistent excellence and Cubanâ€™s role in it, even after a season in which Cuban referred to Jackson as Lakers executive Jeanie Bussâ€™ â€œboy toyâ€ after Jackson made a crack about officiating.

Even something that sounded like an insult was intended as a compliment.

â€œTheyâ€™re the best team money can buy, really,â€ Jackson said after a summation of Dallasâ€™ strengths.

Jackson kept his focus on more important matters, such as the continued progress of Kobe Bryantâ€™s(notes) sprained left ankle. Although Bryant insisted his latest injury is no problem, Jackson worries about the effect of inactivity on his leading scorerâ€™s sore joints.

The Mavericks are worried about Bryant for different reasonsâ€”including their lack of a defender whoâ€™s likely to be able to guard Bryant by himself. After watching Bryantâ€™s performance on that sprain in the final two wins over the Hornets, Dallas isnâ€™t buying any suggestion Kobe isnâ€™t 100 percent.

Dallas and Los Angeles both finished the regular season with 57 wins apiece. The Lakers won two of three meetings for the tiebreaker, and they kept that home-court advantage by the slimmest of margins, needing an overtime victory in their season finale at Sacramento.

That game turned on a desperation 3-pointer by Bryant, but the two-time NBA finals MVP had already forgotten about it Saturday.

While the Mavericks have disappointed their fans during most every postseason in the otherwise wildly successful Cuban era, the Lakersâ€™ title banners delineate the difference between the franchises. Bryant has declared that Los Angelesâ€™ back-to-back championships guarantee nothing this spring, while the Mavericks realize a win over the Lakers would be a tremendous breakthrough and a springboard to the success theyâ€™ve never achieved.

Lakers center Andrew Bynum(notes) thinks these Mavs are good enough to do it, and he gives much of the credit to Haywood and Tyson Chandler(notes), the 7-footers brought in to fix many of Dallasâ€™ historic playoff flaws.

â€œIt just makes their team a little more defensive-oriented,â€ Bynum said. â€œYou canâ€™t win in the playoffs without defense, and picking up 7-footers is one way to address that.â€

Two years ago, Bynum worked out in the summer with Chandler, the Compton product and NBA journeyman who has blossomed in Dallas. Unlike most Los Angeles kids, Chandler says he didnâ€™t dream of taking the court in that famed gold uniform.

He dreamed of doing exactly what heâ€™ll try to do Monday night.

â€œWhen youâ€™re in the backyard and youâ€™re putting up shots and youâ€™re doing the countdown, some players would imagine themselves being other players,â€ Chandler recalled. â€œI would imagine I was killing the Lakers, so hopefully my dreams come true. I guess that I didnâ€™t think I could be one, so the next-best thing was beating them.â€