BOSTON – Fragility concerns everyone, be it the first-to-worst-ever Cavaliers or the two-time champion Lakers, who suddenly hadn’t been able to beat a contender this year, or the Celtics, who as recently as Jan. 30 were exploiting the Lakers’ newfound failings with a 109-96 walloping on their home floor.

Now it is a cold Thursday in February and the Celtics find themselves on the wrong end of a breakthrough 92-86 win by those same Lakers. Now it is Boston that worries about its injury-shortened bench as the surging Miami Heat look forward to coming here for a rematch Sunday – remembering, as LeBron James surely does, those two early losses inflicted by the Celtics early this season. 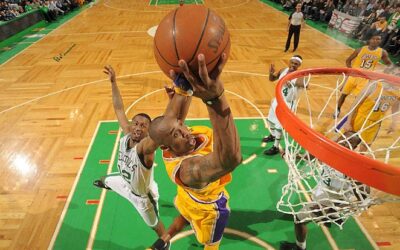 Kobe Bryant’s Lakers ruined Ray Allen’s big night. As Allen stared up at the video screen to see highlights of his younger self that were replayed in the minutes after he broke Reggie Miller’s career three-point record, it wasn’t difficult to imagine one of his thoughts: That the Celtics needed to win this game. At that time they were leading 37-25, and that advantage would quickly grow to 45-30.

But the Lakers would turn that upside-down over the remaining half-hour, outscoring the Celtics 62-43 and outrebounding them 47-36 for the game overall. The Celtics were lacking the three backup centers – Shaquille O’Neal, Jermaine O’Neal and Semih Erden – they had acquired to deal with these Lakers, as well as the backup wings – Marquis Daniels and Delonte West – who might have been able to do something about the 20 points scored by Kobe Bryant in the second half, including the six in a row he converted to grow the Lakers’ lead to an unassailable 88-79 with 3:11 remaining.

“Once he saw there was a chance to win, Kobe was going to be Kobe,” said Boston coach Doc Rivers. “He also knew that we had foul problems on the floor and he was aggressive.”

Remember the months-long talk of the Lakers’ fallibility? It was raised while center Andrew Bynum was recovering from injury and his teammates were loping through the league’s easiest opening schedule. Now that they appear intent on using this ongoing time away from home to show their more serious side – they’ve won all three games to launch the trip, with four more ahead over the ensuing six days – and Bynum is regaining his legs following summer knee surgery, the Lakers are likely to become as intimidating as ever.

This is why the talk of a Bynum trade for Carmelo Anthony is hard to swallow: It would neutralize the Lakers’ core strength and force them to learn an entirely new style two months before the playoffs in coach Phil Jackson’s final season. Who can match their long trio of Bynum (6 of 10 for 16 points and 9 rebounds), Pau Gasol (20 points and 10 rebounds) and Lamar Odom (8 and 8 in 14 second-half minutes, with his best work coming after he’d rammed his forehead into Gasol’s teeth and started gushing blood)?

Maybe the Celtics can neutralize them in June, but not on this wintry night. “We had what we had,” said Rivers, dismissing the excuses. “We had enough bodies to rebound tonight, we just didn’t do it the way we wanted to.”

The Celtics hope by June to be whole, and to use their depth of size to spread the floor for Rajon Rondo (12 points and 10 assists with no turnovers) to roam and create easy baskets. On this night they lacked the depth and the energy, with Paul Pierce (15 points on 15 shots) looking not quite right following the illness that sidelined him from practice Wednesday.

This night belonged to Bryant, who worked his way into the game after developing Bynum and Gasol inside.

“Listen, Kobe didn’t win the game with his offense,” said Rivers. “Defensively he was absolutely phenomenal. He was everywhere. He was helping off Rondo all night, and he trapped the post, blocked shots. He had a great floor game, more than just scoring.”

Bryant recognized the need to beat this biggest of all rivals, and now you can look for him to beat a few more contenders over the next two months. “We’ve got a 1-7 record against `power’ teams,” acknowledged Lakers coach Phil Jackson. “What is important is playing our game, and finding ourselves in a game in which we were highly competitive, and not losing ourselves and having our identity.”

All of those strengths turned the champs’ way. Now the Celtics must find a way to survive a few thin weeks. Let the Lakers’ resilience be their guide.

Chris Paul takes over as Hornets shock Lakers in Game 1