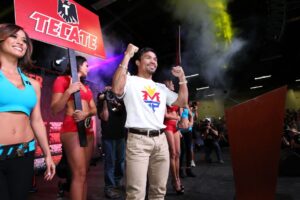 Las Vegas, April 28, 2015 – Boxing fans from all over the world converged for a Pacquiao Fan Rally at Mandalay Bay Hotel & Casino’s Convention open hall to wait the formal arrival of the 8-division world champion Filipino Manny “Pacman” Pacquiao beginning at 9 in the morning and culminated when Pacquiao team emerged from the backstage at 11:30 in the morning.
While waiting, boxing fans were treated by cultural dances of the Filipiniana Dance Group of Las Vegas that included “Tinikling,” the most popular traditional dance and the pride of the Filipinos.

There was no shortage of local entertainment as the duo of the Jas Band serenaded the crowd with their Filipino song “Dahil Sa Iyo” and they followed with a series of English songs. Quincy Victoria and Ron Cabildo of Las Vegas worked hand-in-hand as emcees of the event and making sure that the crowd was animated with their chant of “Manny is in the House” from time to time.

Bob Arum recognized Pacquiao’s contribution to the Philippines as Filipinos applauded. “He give you reason to be proud of this man. He represents you wonderfully and he has taught the world and shown the world how great Filipinos are.”

He also thank Mandalay Bay for being such a great host. “It is becoming the hotel that the Filipinos love to stay at and their hospitality and generosity have been tremendous.”

The event was also graced by the presence of the President and COO of Mandalay Bay, Chuck Foley, who was introduced by Bob Arum. Mr. Foley welcomed the crowd, thanked the media and the fans and reiterated that he was thrilled to be hosting the Pacquiao Fan Rally. “We know you all are here because you love this man and we love having him here and we know on Saturday night he is going to give us the fight of a lifetime.” Mr. Foley finished his talk by introducing Manny Pacquiao as the crowd went into a frenzy chanting his name for 4 ½ minutes before Manny was able to talk on the podium as Manny’s fighting song was played.

“Good morning everybody. Are you excited? Don’t get nervous on Saturday. I am going to fight in the ring. So relax. I am so excited for Saturday and thank you so much for your support and prayers. Especially to the Filipino people, my countrymen, and to all the media.” He also thank HBO and Showtime and all the sponsors of the mega fight, MGM and Mandalay Bay.

He also thank the fans from all over the world. “Thank you for being here to witness the historic fight on Saturday. I really appreciate that. Your overwhelming support that you showed us and I love you guys. Are you excited? I am very excited. The confidence is there, 100%. The Lord is with me and I can do things through Christ. Thank you.”