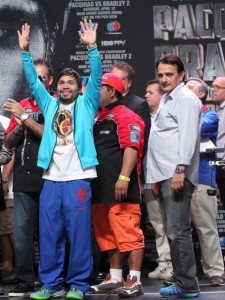 Reports said that Manny Pacquiao’s adviser Michael Koncz (third from right) was responsible for his tax woes. The BIR has made it clear that if only Pacquiao could show that he paid his US taxes, he won’t be “double taxed” by the Philippine government. Photo: Chris Farina / Top Rank

MANILA (Mabuhay) – A lawmaker is seeking to exempt Filipino boxers from paying tax out of the prize and other monetary benefits they receive from boxing competitions.

Representative Emil L. Ong of the Second District of Northern Samar said his proposal, embodied in House Bill 5234 or the proposed “Filipino Boxers’ Benefits and Protection Act of 2014,” aims to support Filipino boxers who brought honor to the country despite risks to their lives.

“The proposal is in line with the constitutional provision pertaining to the promotion of sports, and aims to enable Filipino boxers to enjoy their winnings by making those (winnings) tax-exempt,” said Ong in a statement.

“The tax exemption is an incentive that must be given and enjoyed by our boxers, just like American boxers,” he added.

Ong noted that boxers earn their income on a per-fight basis.

“As distinguished from other tax payers, Filipino boxers only enjoy the prize of their winnings for a limited period of time,” he explained. “Hence, the remainder of their income from winnings after taxes is what is left for a lifetime of support for the boxer and his family.”

Ong further explained that hosting a boxing event provides economic benefits to the host country, and thus, boxing becomes a source of income for the locals and the government.

“The economic benefit the boxers bring to the host country and the honor they bring home when they win make boxing a lucrative sports competition,” he said.

“Boxers are the principal players of boxing as a sports event. It is worthy to recognize their role through legislation that will exempt them from paying taxes out of their prizes from winnings and money benefits derived from winning subject to certain exceptions,” he added.

House Bill 5234 is now pending at the Committee on Ways and Means chaired by Rep. Miro Quimbo of the Second District of Marikina City.

It provides that all Filipino boxers shall be exempt from paying taxes out of the income derived from prizes and money benefits from winnings in boxing competitions. The tax exemption does not cover income derived from commercial advertisements or endorsements, however.

It assigns the Bureau of Internal Revenue (BIR) to promulgate the rules and regulation for the effective implementation of the bill once it is enacted into.(MNS)

Over 20 missing, 3 dead in Philippine landslide