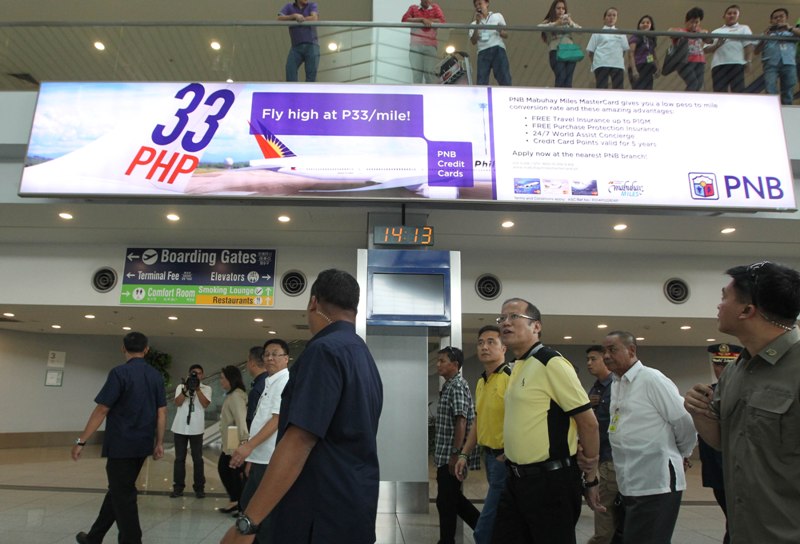 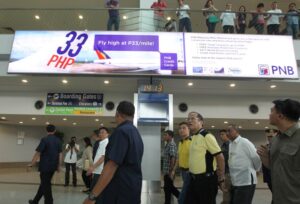 President Benigno S. Aquino III is briefed on the status of passenger volume and traffic, airport security and assistance measures by Manila International Airport Authority (MIAA) OIC, general manager (Ret.) MGen. Vicente Guerzon, Jr.,during the Inspection of Major Passenger Terminals in Metro Manila at the Departure Lobby of the Ninoy Aquino International Airport (NAIA) Terminal 3 in Pasay City on Wednesday (April 16, 2014) during the Inspection of Major Passenger Terminals in Metro Manila. The President wants to make sure that all security preparations are in place to ensure safe travel during the Holy Week. Also in photo are Transportation and Communications Secretary Joseph Emilio Abaya and NAIA Terminal 3 manager Engr. Octavio Lina.(MNS photo)

MANILA, Nov 24 (Mabuhay) – The House of Representatives Committee on Overseas Workers Affairs is eyeing an ocular inspection of the Ninoy Aquino International Airport (NAIA) in connection with a congressional investigation on the integration of airport terminal fees into the airfare of travelers.

This, after the panel began its investigation of the matter in accordance with House Resolution 1656 authored by OFW Family Club party-list Rep. Roy Señeres.

The same memorandum alos ordered the terminal fee for OFWS to be refunded.

The memorandum was deferred pending a final ruling by a trial court on a petition assailing the memorandum.

Señeres said Republic Act 8042 exempts overseas Filipino workers from terminal fees. He said even if the terminal fees are refunded, the memo still violates the law.

MIAA General Manager Angel Honrado said the memo was meant to help decongest the airport. He cites 2013 figures that said about 7.6 million passengers line up to pay terminal fees, of which about 1.9 million are OFWs.

He also cited a 2011 Office of the Government Corporate Counsel legal opinion that said integration of terminal fees is not illegal so long as there is a refund.

Honrado said integrating the terminal fees into the airfare will spare 5.6 million travelers from lining up.

He said the OFWs’ exemptions apply upon proper presentation of credentials as OFW status.

He said only those buying online and overseas will be refunded terminal fees because computers cannot identify OFWs.

Honrado said only about 200,000 OFWS will be affected by the refund policy.

He also maintained tickets purchased in the Philippines honor the exemption of OFWS. There are no terminal fees collected so there is nothing to refund.(MNS)

Get help getting healthy