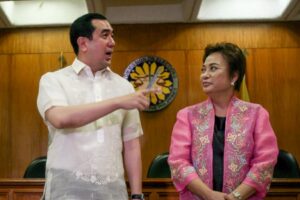 MANILA (Mabuhay) – Commissioners from the three-member Second Division of the Commission on Elections (Comelec) would most likely stick to its decision disqualifying Sen. Grace Poe from the 2016 presidential race for her failure to meet the residency requirement.

High-profile litigation lawyer Raymond Fortun said he does not see Comelec Commissioners Al Parreno, Arthur Lim, and Sheriff Abas reversing their ruling on the matter, especially since they voted unanimously.

“From experience, a unanimous decision is already an ominous sign. It is highly unlikely that these same commissioners would change their mind,” said Fortun.

While acknowledging Poe’s right to appeal and move for the reversal of the decision, he said Poe has the burden of showing “compelling grounds to convince the four other members of the en banc so they can overrule the three from the division.”

“As a general rule, the Poe camp needs to present compelling reasons before the en banc commission of serious errors by the Second Division,” said Fortun.

In a separate open letter that he posted on Facebook last June 4, Fortun said Poe was not qualified to run for president in 2016 under the 1987 Philippine Constitution, which requires a candidate to be a resident for at least 10 years.

The FB post has since received almost 2,800 likes and shares.

Fortun urged Poe to “concede… and follow and obey this country’s laws. Otherwise, we cannot expect that you would follow those same laws if you become president.”

In a comment on his most recent post on FB earlier this week, Fortun clarified he was “not anti-Poe, just pro-Constitution.”

In the Sencond Division ruling, the three poll commissioners sided with lawyer Estrella Elamparo’s petition that Poe failed to meet the 10-year residency requirement mandated by the Constitution for a presidential candidate.

The Comelec division said Poe became a resident only in July 2006 when she applied for dual citizenship, or two months short of meeting the Constitutional requirement.

The Comelec division said this was a “deliberate attempt to mislead or misinform the electorate or hide a fact from them when she supplied the answer” in her COC for the presidency.

Also, several legal experts earlier admitted Poe might have a hard time having the Second Division’s unanimous ruling reversed, especially since the division had considered her COC for the 2013 senatorial race as an “admission against her interest.”

“If Comelec En Banc sustains her disqualification, she would likewise have a hard time at the Supreme Court since, in most cases, the court does not disturb findings of facts of the agency that tried and heard the case since the SC is not a trier of facts,” said poll lawyer Romulo Macalintal in an earlier statement.

Poe, a foundling left at the Jaro Church in Iloilo before being adopted by Fernando Poe and wife Susan Roces, has insisted she is a Filipino and that she has fulfilled the 10-year residency requirement when she returned in the Philippines following her father’s death in 2004.

Documents she would later submit to the Senate Electoral Tribunal to contest a disqualification case against her showed she executed an affidavit of renunciation of her US citizenship on October 20, 2010, a day before he took her oath as MTRCB chair and barely five years ago.

She would affirm her renunciation nine months later, on July 12, 2011.

Several allies of Poe and legal experts have said the doctrine of “animus revertendi —or one’s intention to return to his or her domicile—applies to the senator.

Poe supposedly purchased a property in late 2005 and had a house constructed in Quezon City in early 2006. She also enrolled her children in the Philippines in June 2005.

But aside from her 2010 renunciation, making matters worse for Poe was her continued use of passport up until 2009 for at least 21 times, as Philippine immigration logs that were quoted in earlier reports have shown. (MNS)