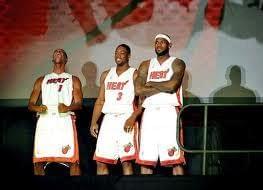 During an interview with CNN’s Soledad O’Brien last month, LeBron James was asked whether he felt race was a factor in the backlash he’s received since signing with the Miami Heat.

“I think so at times. It’s always, you know, a race factor,” he replied.

That short answer sparked a lot of discussion, including a great deal of criticism, from fans and media members alike. After all, playing the “race card” seemed like a cop-out, especially for those whose criticism of James was directed at the manner in which he revealed his decision – a self-aggrandizing television special – than his actual decision to leave the Cleveland Cavaliers.

Complicating matters was the fact that James refused to clarify his comments the next day. “I’m not going to go back on my words,” James said. “People are looking too far into it. I said what I had to say and I’ll continue to move on.”

On Tuesday, James may have unintentionally offered some long-awaited context to his answer, retweeting an offensive and racist message directed to him on Twitter.

The RyanOutrich account from which the offensive tweet has since been deleted, but a search engine cache of RyanOutrich’s Twitter page (warning: the page contains offensive language and may not be safe for work), which indicates the user is from Strongsville, a town 30 minutes south of Cleveland, Ohio, shows that the tweet cited above was just one of a barrage of racist – and overtly threatening – tweets directed at James. Included in the rant was this: “U have til the end of the day to RT me and if u dont….tomorrow u will not wake up happy…or al i ve”.

James followed his retweet with a message of his own: “U see world how people feel! Just use it as extra motivation in whatever u do best! No one can stop your dreams from becoming reality!”

After Miami’s practice on Wednesday, James further explained why he shared the message. “I just want you guys to see it also,” James said, as cited by Brian Windhorst. “To see what type of words that are said toward me and towards us as professional athletes. Everybody thinks it is a bed of roses and it’s not.”

Even though James didn’t connect his decision to share the racist tweet with his response on CNN, it’s likely that this isn’t the first time someone has directed such venom in his direction. Twitter’s “@replies” are publicly viewable, but usually only when directly searching for them, which makes it easy to overlook the volume of hateful messages James, or any prominent athlete, may receive.

James is often perceived to be insulated from outside criticism, perhaps oblivious to the more nuanced objections to his actions. But Twitter offers a direct, unfiltered connection to the general public. So regardless of whether you agree with the notion that race has influenced the mainstream media’s reaction to James’ decision to sign with Miami, it’s impossible to deny that James hasn’t been exposed to blatant racism via social media.