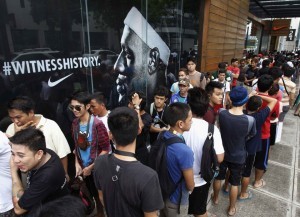 Fans of Miami Heat’s Lebron James queue for a second day to obtain free tickets for his visit, outside a mall in Manila July 17, 2013. NBA basketball player James is scheduled to arrive in Manila on a one-day visit on July 23, 2013, according to local media. (MNS photo)

MANILA, July 23, 2013 (AFP) – Fans of LeBron James in the basketball-crazy Philippines were in raptures Tuesday after queuing in sun and rain for up to three days to see their hoop god in the flesh.

The Miami Heat star was greeted with indoor fireworks and chants of “MVP” (most valuable player) as he wowed about 15,000 fans with thunderous dunks and deadly three-point shooting at an hour-long basketball clinic.

“It’s unbelievable, man,” James gushed as he basked in the adulation before going on a scrimmage with the Philippines’ national team and selected stars from Manila’s collegiate basketball league.

Manila businessman Franco Miguel, 32, said he and a friend took turns standing in line last week outside a US sporting apparel shop that had announced it was giving away free tickets to the clinic.

“Seeing LeBron James, my God! Even though I fell in line for two days, to see him personally is huge,” Miguel told AFP.

Basketball is the number one sport in the Philippines, a former US colony in a region better known for its passionate soccer following.

The visit, part of an Asian tour, came a month after the James-led Heat’s successful defence of their National Basketball Association championship.

Government clerk Ian Castillo watched the clinic with his eight-year-old son, having gone on leave from work since last week to line up for tickets.

“My friends and I were in line for three days. We organised a relay system so others could go home and grab a few hours’ sleep,” said Castillo, who was seated high in the bleachers.

Local newspapers last week published front-page pictures of thousands of fans camped out in front of the shop at an upscale Manila shopping complex, with some asleep in tents.

The papers said they endured torrential rain, heat and exhaustion as long lines began forming three days before the tickets were given out.

Local spokesmen for Nike, the apparel outfit that sponsored the James visit, said it gave away all 15,000 tickets for free.

However some ended up on online auction at up to 10,000 pesos ($232) each, or three weeks’ pay for workers earning the minimum daily wage.

Allan Casenas, 31, who runs his family’s safety equipment business, bought a pass for 3,500 pesos from somebody who had secured one from the queue.

“He’s solid on defense, he dominates offensively, and he gets his teammates involved,” said Casenas, who wore a replica Heat jersey with James’s number 6.

“I believe Michael Jordan is still the greatest, but LeBron has a chance to surpass him,” he said, referring to retired NBA star Michael Jordan.