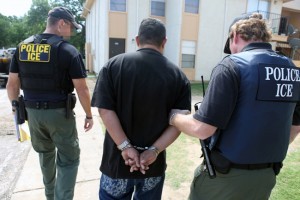 On Tuesday, June 28, Republican Gov. Nikki Haley signed SB 20, a draconian racial profiling law that pushed South Carolina into the all-too-crowded race to see which state can pass the most heinous piece of anti-Latino legislation.

Washington, D.C. â€“ Throughout the past week, state-level legislative and judicial action has created an increasingly complex patchwork of immigration laws that underscore the need to address immigration reform at the national level. Â On Tuesday, June 28, Republican Gov. Nikki Haley signed SB 20, a draconian racial profiling law that pushed South Carolina into the all-too-crowded race to see which state can pass the most heinous piece of anti-Latino legislation. Â By signing SB 20 into law, Gov. Haley chose to walk down the same misguided and unconstitutional path as other states that have enacted laws that demonize immigrants and threaten the civil rights of state residents.

Instead of pursuing this course of action, South Carolina should have looked to the court decisions blocking similar racial profiling bills in Arizona, Utah, and, most recently, Indiana and Georgia. Â On June 24, U.S. District Judge Sarah Evans Barker granted an injunction blocking the section of Indianaâ€™s SB 590 that would have increased police arrest authority for anyone ordered deported by an immigration court. Â Then, on June 27, U.S. District Court Judge Thomas Thrash halted two sections of Georgiaâ€™s HB 87 that would have increased law enforcementâ€™s authority to request documentation of citizenship and punished people who knowingly transported or harbored undocumented individuals.

These decisions affirm the misguided nature of these laws.Â  Any state that passes these anti-immigrant laws is likely to face the same legal hurdles that have befallen Indiana and Georgia, as well as Utah and Arizona before them.

Thankfully, many states have opted against following Arizonaâ€™s failed approach to immigration reform. Â In fact, on June 28, the Texas Legislature adjourned without approving the anti-immigrant, anti-Latino â€œsanctuary citiesâ€ bill, marking the second time in two months that the Republican-controlled state legislature rejected the proposal. Â We commend the efforts of the advocates, NCLR (National Council of La Raza) Affiliates, law enforcement officials, and religious groups who worked tirelessly with the heavily Republican legislature, which ultimately found that these foolish, misguided, and politically motivated bills would be devastating to the stateâ€™s financial health and public image.

Our nation is frustrated by federal inaction on immigration reform, but the response to federal inaction cannot be irresponsible state action.Â  Measures such as South Carolinaâ€™s SB 20 â€“ racial profiling legislation cloaked under the false guise of immigration solutions â€“ do not solve immigration problems and are simply excuses for officials to play politics at a high cost to the residents of their states.

Our nation will be better off if legislators focus on the real issues and create viable solutions that fix immigration at the federal level, instead of enacting laws that will encourage racial profiling and discrimination.Â  NCLR urges Gov. Haley and the governors of Georgia, Alabama, Utah, Indiana, and Arizona to call upon their own congressional delegations to push for comprehensive immigration reform in Washington.

NCLR â€“ the largest national Hispanic civil rights and advocacy organization in the United States â€“ works to improve opportunities for Hispanic Americans.Â  For more information on NCLR, please visit www.nclr.org or follow us on Facebook and Twitter. â–

I woke up from my American Dream