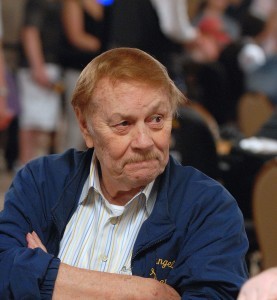 LOS ANGELES, Feb 18, 2013 (AFP) – Jerry Buss, the Los Angeles Lakers owner who transformed the team into the glamour franchise of a revitalized NBA, died on Monday at the age of 80.

Cedars-Sinai Medical Center spokeswoman Sally Stewart said Buss died at 5:55 am. He had been reported to be in hospital last week fighting an undisclosed form of cancer.

Buss made the Lakers one of the biggest draws in Los Angeles with a combination of shrewd personnel moves on and off the court and a feel for show business glamour.

The Lakers have the highest payroll in the NBA at $100 million, but they were recently valued by Forbes magazine as being worth $1 billion – second in the NBA only to the New York Knicks.

At the NBA All-Star weekend festivities on Friday, Kobe Bryant said Buss’s contribution to the NBA and the game of basketball was “beyond measure”.

“I don’t think there’s any way to really define it,” the Lakers superstar said. “What he’s done, it’s tough to really find a match for that in any sport. He’s been a model of consistency.”

After working in the aerospace industry, he and a colleague put together the funds to buy a small apartment house.

By 1979, real estate ventures allowed Buss and his partners to buy the Lakers, their Forum arena, the Los Angeles Kings National Hockey League team and a 13,000-acre Kern County ranch from Jack Kent Cooke for $67.5 million – then a record for such a transaction.

When Buss bought the Lakers, they had won one championship in the previous 25 seasons.

The Lakers won the NBA title in Buss’s first season as owner and added four more championships in the next eight seasons.

Magic Johnson led the up-tempo “Showtime” offense that became a favorite of such LA notables as actor Jack Nicholson.

The Lakers became the first NBA team to have a dance squad, the Laker Girls, who inspired similar troupes on other NBA teams.

The Lakers won three more NBA titles from 2000-2002 with teams led by Shaquille O’Neal and Bryant.

In 33 years of Buss’s ownership the Lakers reached the playoffs 31 times.

Personally, Bryant said, Buss had a tremendous impact on his own career.

“He’s meant everything to me in my career, taking a risk on a 17-year-old kid coming out of high school and believing in me my entire career,” the superstar said.

“For the game itself, the brand of basketball, ‘Showtime’ carried the league. You think about the rivalry that took place between the Lakers and the Celtics, and what that did for the global outreach of the game.”

Buss’s 10 championships as an owner are the most in NBA history and he was elected to the Basketball Hall of Fame in 2010.

Buss had handed over control of the franchise to son Jim, who looks after the basketball side of the club, while his daughter Jeanie oversees business matters.