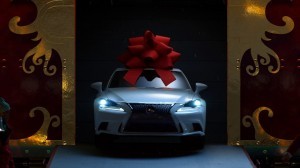 TORRANCE, Calif. – Lexus today launches its annual “December to Remember” Sales Event with a new integrated marketing campaign that offers a fun spin on gift giving and holiday cheer. Anchored by three general market commercials, the campaign reveals some of Santa’s inventive gift-giving secrets and illustrates that with Lexus you’re never too old for toys.

“The holidays are a time of year when people indulge their imaginations and share stories filled with magic and wonder,” said Brian Smith, Lexus vice president of marketing. “This year’s holiday campaign celebrates the tradition of storytelling and reminds us that children aren’t the only ones who get to have fun this time of year.”

The first spot, “Christmas Train,” shows an iconic holiday train maneuvering along a snowy mountain track. The train grinds to a halt in front of a neighborhood home. Holiday elves jump out to help unload a Lexus IS F SPORT sedan, donning the brand’s iconic big red bow, into a family’s driveway. The spot flashes to the next morning, as the mom finishes telling her wide-eyed kids the story of how the vehicle arrived.

In “Magic Box,” Santa places a small wrapped box on another neighborhood driveway. The box opens up and magically transforms, gear by gear, into a full-sized Lexus ES sedan. The spot cuts to the dad explaining to his surprised wife and kids how Santa delivered this feat of engineering.

The final spot, “Teleporter,” shows a Lexus RX luxury crossover driving through a winter wonderland. Two elves greet the vehicle at an ice-covered teleportation machine; they pull a lever and the car is zapped to a third family’s driveway. The spot cuts to a dad telling his kids how Santa delivers the “big stuff.” All three spots end with a voiceover that states, “The magic of the season is here, at the Lexus December to Remember Sales Event.”

The broadcast spots begin airing today on network and cable television, sports channels and more. Additionally, one of the spots, “Christmas Train,” will be translated for the Hispanic and Asian-American markets, providing further reach. The print campaign adopts a similarly playful tone with a headline that reads, “Perfect Garage Stuffers.” A digital partnership with The Weather Channel will provide targeted December Sales Event ads in real time based on local weather conditions.

For the real thing and real deal, better call our kababayan and veteran car sales expert Nash Jimenez, who is one of the best known car specialists in Southern California for his dedicated and decades of customer service. You can visit Nash or you may also want to call General Manager Doug Pearson anytime at Crown Lexus located at 1125 S Kettering Dr, Ontario, CA 91761. Call them now toll free at 1-800-434-5793 so you can be in a brand-new Lexus today!