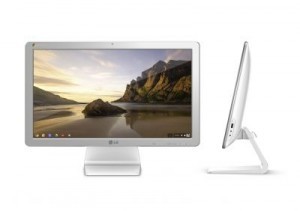 (Relaxnews) – The Chromebase will be the first desktop computer to run Google’s cloud-based operating system and will be demonstrated for the first time at the International CES in January.

Designed to be fast and simple to use, the Chrome OS and all of its applications exist online where they are perpetually updated and improved, meaning that Chrome computers contain very little on their hard drives.

This makes them potentially virus-free and ensures that they boot up in seconds, rather than minutes.

As well as fast operating speeds, the Chromebase boasts a full HD 21.5-inch display and the whole device is housed in a clean, minimal white angle-poise shell.

The low-power and low-graphics operating system allows computer companies to use much more basic components and processors, but LG has chosen to go in the opposite direction and as well as an excellent display, the computer gets a latest-generation Intel Celeron processor, integrated speakers and a 1-megapixel webcam.

However, in keeping with other Chrome computers, the Chromebase only gets a 16BG solid state hard drive, meaning that if users want more space they’ll have to look to the cloud or invest in a standalone hard drive.

Connecting one shouldn’t be a problem, though as the computer offers 3 USB 2.0 and one USB 3.0 port, as well as HDMI in.

The International CES opens its doors to the public on January 7.

Aquino expresses gratitude to China, Hong Kong for their understanding