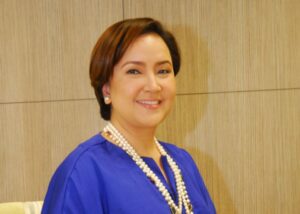 Actress Liezl Martinez, wife of actor Albert Martinez, passed away Saturday morning after a long battle with cancer. She was 47.

The news was confirmed by her uncle Cheng Muhlach, father of actor Aga Muhlach. The older Muhlach said Liezl had been confined in the hospital for over a week.

Daughter of screen legends Amalia Fuentes and Romeo Vasquez, Liezl started her acting career in 1968 as a child star with the screen name Anna-Lissa, mostly in films produced by and starring her mom.

In 1984, she was relaunched as a teen star billed simply as Liezl in the film “Ibulong Mo Sa Puso” directed by the late Mario O’ Hara. It was during this film that she met future husband Albert Martinez who directed a short film of her 18th birthday celebration that was included as a special attraction during the film’s theatrical run.

After that, Liezl had a distinguished stint as one of the hosts of the GMA noontime show “Salo-Salo Together” from 1993 to 1995. Her co-hosts included Randy Santiago, Dennis Padilla, Smokey Manaloto, Giselle Sanchez, Anjanette Abayari and Joy Ortega.

In 2010, Liezl appeared in a supporting role in her last known film, “Rosario”, the true story of Rosario Herrera, grandmother of PLDT and TV5 chairman Manny V. Pangilinan. The award-winning film was directed by Liezl’s husband and starred Jennylyn Mercado in the title role.

Apart from her occasional film and TV roles, Liezl remained active in the industry as a member of the Movie and Television Review Classification Board.

In one of her last posts in her Twitter and Instagram accounts last February 4, Liezl shared her last known photo (see below) together with her fellow MTRCB board members during a review screening of the controversial Hollywood film, “Fifty Shades of Grey”.

Liezl was first diagnosed with stage 3 breast cancer in 2007. In 2010, it was announced that the cancer had gone in remission but recurred in 2011 and had metastasized to her left lung.

In addition to her chemotherapy, it was reported that Liezl underwent stem cell treatment at The Medical City and by September of that year, it was again reported that her cancer was in full remission. Two years later, a healthy-looking Liezl talked about how she had survived the Big C.

According to Cheng Muhlach, Liezl’s remains can be viewed at Arlington Memorial Chapels in Araneta Avenue, Quezon City. (MNS)