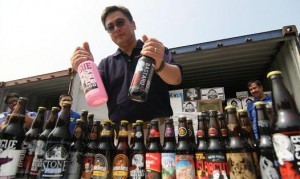 A pet owner sits next to her dog which is dressed in a lion costume during the Scaredy Cats and Dogs Halloween costume competition at Eastwood mall in Quezon city, metro Manila October 26, 2013. (MNS photo)

MANILA (Mabuhay) – More than 150 were arrested overnight during the implementation of the 24-hour liquor ban for today’s barangay elections.

The Philippine National Police (PNP) said that as of 7:41 a.m. Monday, a total of 153 persons were arrested in various areas in the country during the implementation of the alcohol ban.

The breakdown showed that the largest number of violators came from Davao region with 51 arrested followed by Metro Manila having 42.

The arrested liquor ban violators will face possible imprisonment up to six years for violation of the Omnibus Election Code.

Meanwhile, almost 600 were caught violating the ongoing gun ban by the Commission on Elections (Comelec).

Among those arrested were 551 civilians, seven policemen, eight from the Armed Forces of the Philippines (AFP) including three CAFGUs, 21 security guards, and four government officials.

The statistics also showed that 5,120 firearms, ammunition and other weapons or explosives were seized as of Monday. (MNS)

OFWs need to submit names, destinations before returning to PH