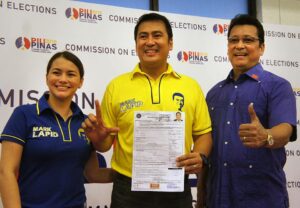 Mark Lapid, along with his wife Tanya and father Senator Lito Lapid, files his certificate of candidacy for senator at the Comelec office in Manila on Wednesday, October 14. (MNS photo)

MANILA (Mabuhay) — Senator Lito Lapid and five other individuals are facing graft charges for their alleged involvement in the multi-million peso fertilizer fund scam in 2004.

In a case filed with the Sandiganbayan on Wednesday, the Office of the Ombudsman, through its Office of the Special Prosecutor (OSP), charged Lapid and his five co-accused with violations of Sections 3 (e) and 3 (g) of Republic Act 3019 or the Anti-Graft and Corrupt Practices Act.

Aside from Lapid, named as respondents in the case were Pampanga provincial account Benjamin Yuzon and provincial treasurer Vergel Yabut.

Based on the information of the case, in May 2004, the provincial government of Pampanga during the term of Lapid as governor, purchased from MPTC 3,880 liters of liquid fertilizers formulated by DAVMMFR amounting to P4.761 million.

The Ombudsman said the purchase was done without public bidding as required under Republic Act 9184 or the Government Procurement Reform Act.

The Ombudsman said the respondents also violated the procurement rules by resorting to direct purchasing “despite the availability of a suitable substitute offered at a much lower price in the locality.”

The Ombudsman alleged that it was Lapid who certified that there was no suitable substitute to MPTC’s Macro-Micro Foliar Fertilizer, which paved way for the provincial government to unlawfully resort to the direct purchase agreement.

The Ombudsman further pointed out that specification of a brand name in a purchase request was also a violation of the procurement rules under RA 9184.

The anti-graft body also cited the “inordinate speed” in the consummation of the transaction between the provincial government and the private respondents.

The Ombudsman noted that it was on May 12, 2004 when Vasquez’s DAVMMFR submitted the price quotation for the fertilizer products. The Ombudsman said that on May 24, 2004 Lapid had already issued the purchase order and on the same day, delivery was supposedly made.

The Ombudsman noted that on May 26, full payment was made by the provincial government to MPTC, thus, the full transaction was allegedly completed in a span of 14 days.

The Ombudsman further alleged that MPTC was not authorized supplier fertilizer products as it has no product registration and certificate of license to operate.

Meanwhile, the Ombudsman said that the purchased items were also not registered with the Fertilizer Pesticide Authority (FPA) as it was only in August 2005 when DAVMMFR applied for Product Registration with the FPA.

Finally, the Ombudsman stressed that the purchased items were overpriced by as much as P4.268 million as the fertilizer was sold at P1,250 per liter when its real tvalue was only P150 per liter, “thereby causing undue injury to the government.”

Section 3(e) of RA 3019 prohibits a public official from causing any undue injury to any party, or giving any private party unwarranted benefits, advantage or preference in the discharge of his official administrative or judicial functions.

Meanwhile, Section 3(g) of RA 3019 prohibits the act of entering, on behalf of the government, into any contract or transaction manifestly and grossly disadvantageous to the government, “whether or not the public officer profited or will profit thereby.”

The Ombudsman has recommended a bail bond of P30,000 for each count of the alleged graft offense.

Alex Marcelino, a staff of Lapid, declined to comment, saying they have yet to receive a copy of the Ombudsman resolution on the graft case against the senator.

Lapid is set to end his term as senator in June 2016. He earlier filed his certificate of candidacy for mayor of Angeles City in Pampanga. (MNS) 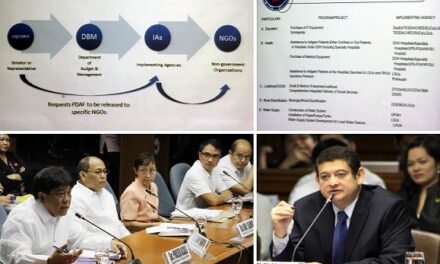 Scoot over, AirAsia – why Singapore’s new carrier could be good news for consumers