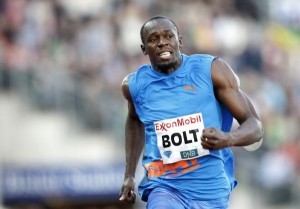 (Relaxnews) – On Friday, July 27, the world’s best athletes will descend on London for the opening ceremony. The Olympics will bring together the world’s established and rising sports stars, including the fastest man on Earth, Jamaican sprinter Usain Bolt. Here’s a preview of three of the biggest names who are aiming for Gold.

Jamaican athletes on the right track

Built at the heart of London’s Olympic Park, the stadium where the flame will be lit during the opening ceremony will host some of the greatest competitions of the event. 80,000 people are expected to gather in its stands to witness Usain Bolt in motion.

Another Jamaican sprinter could threaten Usain Bolt’s chances at another Olympic gold medal: current World Champion Yohan Blake, who already managed to outrun his illustrious training partner in the 100 meter and 200 meter dash earlier this year.

American swimmer Michael Phelps, who holds the most gold medals in the history of the Olympics, will once again make history this year if he manages to add three medals to his collection of sixteen. He would then hold the record for most Olympic medals won by a single athlete, a feat that seems within his reach since he will participate in seven swimming events.

Federer looking to repeat his recent success in London

A few weeks after his seventh title gleaned on Wimbledon’s lawns, Roger Federer, the highest ranked tennis player in the world, will be back in the British capital with a clear path to gold, thanks to Rafael Nadal’s recent withdrawal.

More than 10,000 athletes will compete in 26 sports during the international event. While each sport will feature its own established stars, you can also expect a few surprises from up and coming athletes who are all well prepared for the limelight, as the history of the event has shown time and time again.