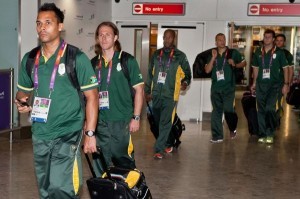 Members of the South African Olympic Men's Hockey Team arrive at Heathrow Airport in London on July 23, 2012. A new probe which says elite athletes who have to travel very long distances are nearly three times likelier to fall ill than when they play at h Â©AFP PHOTO / WILL OLIVER

(PARIS-AFP) – Could health explain Britain’s stellar success in the Olympics and Australia’s disappointment?

That is one of the questions arising from a new probe which says elite athletes who have to travel very long distances are nearly three times likelier to fall ill than when they play at home.

“What the results of this study emphasize is home advantage,” says the lead author of the study, Professor Martin Schwellnus at the University of Cape Town in South Africa.

“You have a healthier team when you are at home as opposed to when you are travelling, and so that can and must contribute to the performance eventually.”

Schwellnus analysed cases of illness recorded among eight teams which took part in the 2010 Super 14 rugby tournament, a competition staged over four months in Australia, New Zealand and South Africa.

Teams that were not playing on home soil had a time-zone difference of between two and 11 hours from their own.

During the tournament, team doctors logged 469 cases of illness — defined as respiratory illness, gastro-intestinal sickness or skin infections — in 187 of the 259 players. Playing injuries and other conditions did not fall into this category.

What was remarkable, said Schwellnus, was that the rate of illness varied hugely, depending on where the matches were played.

When a team played on home turf before they travelled abroad, incidence was 15.4 cases of illness for every 1,000 “player days,” a unit of time.

This rose to a whopping 32.6 per thousand for matches played in locations that were more than five hours’ time difference from home, regardless of the direction of travel.

For matches that were played on return back home after international travel, incidence fell back to a mere 10.6 cases per 1,000 player days, according to the study, published by the British Journal of Sports Medicine.

Schwellnus said the illness risk did not lie with air travel.

If that were the case, rates of respiratory infection would have been equally high for outward and return trips.

The problem lies with adaptation to foreign conditions, he suggested.

Likely factors include differences in pollution, temperature and humidity and exposure to new allergens, kinds of food and germs.

Are they giving elite athletes enough time to adapt when they travel to distant competitions? And should they pinpoint players who could be more at risk than others?

“The assumption was that rates of illness would be highest in the first week that you are there, and that every week thereafter that it would get less,” he said in a phone interview with AFP.

“But in fact that was not the case. Once you are in the country, and we followed the athletes up to five weeks in the foreign country, the risk of this illness was still high in the fourth or fifth week.

“I don’t know how long you will need to adjust, but it’s going to be longer than five weeks.”

Schwellnus cautioned against those who dismissed the illnesses as a passing case of the snuffles.

“Some of them can lead to very serious medical complications, with viral infection of the cardiac muscle. In extreme cases, they can culminate in sudden death.”

Asked to comment on the stark contrasts in success between Team GB and Australia in the London Games, Schwellnus said he was not privy to inside information on team health and management.

But he said he would not be surprised if the travel distance played a part.

“The fact that they (the Australians) have come from far away and the fact that they have to travel a very long distance, from south to north and also from east to west, perhaps makes a difference.”