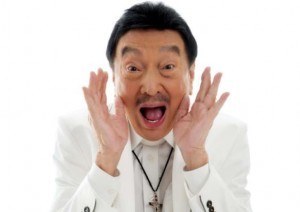 Dolphy, dubbed the countryâ€™s â€œKing of Comedy,â€ whose body of work on stage, movies and television mirrors the history of Philippine entertainment, died on Tuesday night. He was 83.

With his lean physique and humble demeanor, Dolphyâ€™s memorable characters, notably as the down-on-his-luck family man John Puruntong in the long-running sitcom â€œJohn and Marsha,â€ effectively captured the travails of the common Filipino who is able to find humor even in the direst situations.

Dolphy died after a five-year battle with chronic obstructive pulmonary disease (COPD), according to his long-time partner, actress and singer Zsa Zsa Padilla.

â€œWe would like to inform the public that Mr. Rodolfo â€˜Dolphyâ€™ Quizon, passed away today, at 8:34 p.m. due to multiple organ failure, secondary to complications brought about by severe pneumonia, chronic obstructive pulmonary disease and acute renal failure,â€ the Makati Medical Center said in a statement.

â€œWe join the entire Filipino Community in praying for the soul of Mr. Quizon and his dearly beloved family and friends. To the Quizon Family, we extend our deepest condolences,â€ the hospital said.

Dolphyâ€™s family was caught by surprise over his death on Tuesday night.

According to a medical bulletin issued Tuesday at 4 p.m., Dolphy was said to be responding well to treatment.

â€œDolphy underwent dialysis and blood transfusion yesterday. Platelet apheresis is also being performed. X-ray results show that he is responding very well to the treatment and recovering from his pneumonia,â€ the bulletin said.

Doctors noticed, however, that compared to yesterday, Dolphy was asleep most of the time on Tuesday.

â€œHe is not as lucid and active as yesterday, however, and is seldom awake. Doctors are awaiting other results from the tests and the treatments, and has advised to give him a rest day today,â€ the bulletin added.

Eric Quizon, spokesman of the Quizon family, rushed to the Makati Medical Center after he received information that his father had passed away.

Dolphyâ€™s remains will be brought to the Heritage Memorial Park in Taguig City.

Apart from his work as an actor, Dolphy was just as known for his colorful love life.

He also had a child, whoâ€™s now living in the United States, with Evangeline Tagulao.

As a young boy, Dolphy sold peanuts and watermelon outside a nearby theater.

He took on other lowly jobs â€“ as a porter and shoeshine boy â€“ amid the hardships of World War II before trying out as a dancer and chorus boy at the Avenue and Lyric Theaters, where he took on the name â€œGolay.â€

He reverted to his given name when he was discovered by Fernando Poe Sr. This led to Dolphyâ€™s first movie â€œDugo ay Bayan,â€ which he made when he was 19.

In interviews, Dolphy had said his favorite and most memorable movie was â€œJack and Jill,â€ where he portrayed a gay character for the first time. Dolphy also said this was the movie that made him a star.

The countryâ€™s iconic comedy duo of Dolphy and Panchito was born in 1963, when the two comedians were cast on the ABS-CBN show â€œBuhay Artista,â€ which was conceptualized by ABS-CBN patriarch Eugenio Lopez Jr. and renowned TV director Ading Fernando.

Two years later, Dolphy founded his own film company, RVQ Productions, which helped propel his status as the countryâ€™s comedy king with movies such as â€œDolfinger,â€ â€œFefita Fofonggay,â€ â€˜El Pinoy Matadorâ€ and numerous others.

But for many followers of showbiz history, Dolphyâ€™s biggest triumph was the multi-awarded sitcom â€œJohn en Marsha,â€ with the late Nida Blanca as his wife and a young Maricel Soriano as his daughter. The TV comedy series about the struggles of a poor man working hard for his family while enduring the contempt of his condescending mother-in-law (Dely Atay-atayan) premiered in 1971 and ran for 15 successful years. It also spawned eight movies.

It was also around this time when Dolphy was finally recognized for his acting skills, after he bagged the FAMAS Best Actor prize for the critically acclaimed â€œOmeng Satansya.â€ He also earned raves for his dramatic turn as a transvestite raising a young boy in Lino Brockaâ€™s â€œAng Tatay Kong Nanay.â€

By the late 1980s, however, Dolphyâ€™s career took a downturn after his controversial breakup with Alma Moreno and news of his relationship with Padilla.

But in 1991, the comedian staged a major comeback with the ABS-CBN sitcom â€œHome Along Da Riles.â€

Using the same formula that made â€œJohn en Marshaâ€ a hit, â€œHome Along Da Rilesâ€ revolves around an extended Filipino family living alongside the railroad tracks. Dolphy played the family breadwinner Kevin Kosme, who works as a messenger and janitor but dreams of working overseas. While the Kosmes are poor, they, like the Puruntongs, are happy, maintaining a positive outlook on life.

The series, which ran for 11 years from 1991 to 2002, featured at one time or another several actors who later on would become major stars in show business, including Claudine Barretto, Rica Peralejo and Vhong Navarro.

Dolphy would once again win an acting award for yet another gay role when he starred in 2001â€™s â€œMarkova: Comfort Gay,â€ about the real-life story of a Filipino homosexual who was forced to have sex with Japanese soldiers occupying Manila in World War II.

Dolphy shared the role with his real sons Eric and Epi Quizon, who played Markova in various stages of the characterâ€™s life. All three shared the Best Perfomer award at the Brussels International Film Festival.

Amid public clamor to have him declared a National Artist, Dolphy, who would have turned 84 this month, was awarded the Grand Order of the Golden Heart by President Benigno Aquino III in November 2010 for his contributions to art and culture.

It was also in 2010 that Dolphy released his last film â€œFather Jejemon,â€ an entry to the 2010 Metro Manila Film Festival, for which he won the Best Actor trophy. It was a double victory for him as he also took the Best Supporting Actor award for his performance in another entry, â€œRosario.â€

He also managed to star in a one more television show, â€œPidolâ€™s Wonderland,â€ for TV5.

According to the comedianâ€™s son, Eric Quizon, his father was diagnosed with COPD five years ago. The illness, which hinders the flow of air to the lungs, is generally permanent and may be progressive over time.

Likening COPD to cancer, Quizon said Dolphyâ€™s illness has developed into a toxic metabolic encephalopathy, which could lead to sepsis or the poisoning of the blood.

Reports of Dolphyâ€™s deteriorating health surfaced in late 2010, triggering numerous rumors about his death. Since then, he had been in and out of the hospital due to respiratory problems. Quizon said Dolphy survived ten bouts with pneumonia before the disease hit him again last June 9.

Yet despite his frail condition, Dolphy still managed to attend the launch concert of his daughter Zia Quizon last year.â€œKahit medyo tagilid ako kailangan andito ako, bunso ko yan eh. I wish her all the luck,â€ he said at the time.

Throughout his battle with his illness, Dolphy maintained his sense of humor until the end, poking fun at the undying rumors about his condition.

But on Tuesday, the laughter had finally come to a stop. (MNS)

How to Eat Thai and Enjoy It