LOS ANGELES – A page in our historical saga, and an epic of courage, valor and profound love of country, unfolds June 14, at the Westin Los Angeles Airport hotel when Kalayaan Incorporated hosts a cultural evening commemorating the 116thanniversary of the proclamation of Philippine Independence from Spain on June 12, 1898.

“She has been dubbed as the most respectful member of congress in the Philippines because she never fails to say ‘poe’ and ‘opoe,’” quipped Joveno ‘Bing’ De La Vega, president and overall chair of the gala. “She made election history by garnering the highest number of votes (20 million) in the May 2013 elections.  This overwhelming mandate,” he added, “must have inspired her to work hard towards her father’s unfulfilled dream of uplifting the lives of the Filipino people.”

One of the first bills the senator filed is the institutionalization of a feeding program for public elementary and secondary schools (Sustansya sa Batang Pilipino Program).

Sen. Poe grew up knowing actress Susan Roces and her husband, the late action film star Fernando Poe Jr., as her parents. Her father is also known by monickers ‘FPJ’ and ‘Da King,’ short for King of Philippine Movies. 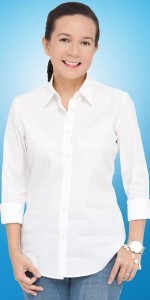 “The twenty-one officers and board directors of the corporation,” added the founder of the Philippine (emergency) Disaster Relief Organization, also known as PeDRO, “are leaders and officers of various organizations representing different regions, provinces, towns and cities in the Philippines; also alumni, business and civic organizations of Filipinos residing in Southern California, home of the largest concentration outside the Philippines presently numbering more than 1.5 million.”

De La Vega, who had served as president of the Pangasinan Brotherhood USA, has been involved in Kalayaan celebrations for the past nine years and was instrumental in developing the corporation’s bylaws. He’s married to the former consul general in Los Angeles Hellen Barber De La Vega, but has honored his commitment to Kalayaan Incorporated, staying behind after his wife left in March to assume her new position at the Dept. of Foreign Affairs in Manila as the senior special assistant to the Undersecretary for Policy.

“The Kalayaan observance is the most awaited annual formal event by Filipinos in this part of the world, with the support and cooperation of the Philippine Consulate General in Los Angeles,” stated VP Evelyn Andamo, past president of the Fil Am Chamber of Commerce, South Bay Los Angeles Area.

“From now on, zero tolerance for any aspect of the culture of corruption. We call on each and every Filipino to come out and join this unified expression of outrage and disgust. Together, let us all demand our freedom from corruption,” it added. (MNS)