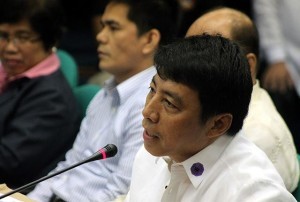 Engr. Mario Hechanova, former head of the Makati City government’s general services department and vice chairman of the bids and accounts committee, testifies before a Senate inquiry on alleged overpricing in the Makati City Hall Building 2 on Thursday, September 4. He said the bidding for the alleged overpriced construction of the building was rigged. (MNS photo)

MANILA (Mabuhay) – The head of a construction firm that lost to Hilmarc’s Construction Corporation in the bid for the Makati City Hall Building 2 has denied Thursday ever bidding for the project.

This is despite documents showing that the firm was outbidded by Hilmarc’s for the first phase of the parking building by only P317,357.17 in 2007.

Alejandro Tengco, CEO of JBros Construction Corp., said his company has never participated or purchased any bid documents for any infrastructure project in Makati City. He pointed out his firm was not even qualified to participate in the bidding for the Makati City Hall building 2.

Similarly, he was also surprised when told that his company was again outbidded by Hilmarc’s for the Makati Science High School project.

He said it was the first time that he had heard that his company was allegedly included in the list of losing bidders for the building project.

Tengco’s statements backed previous testimony by Engineer Mario Hechanova that the bidding for all infrastructure projects in Makati are rigged. Hechanova is the former head of Makati City’s general services department and vice chairman of the bids and awards committee.

Speaking before the committee, Hechanova said the bid documents allegedly coming from JBros and another “losing bidder” for the Makati City Hall building 2 actually came from Hilmarc’s.

He said it was Hilmarc’s that received the bid documents of the “losing bidders” and allegedly had the papers signed by the owners of the losing construction firms.

He also said the bidding for both the first phase of the Makati City Hall Building 2 and the Makati Science High School was conducted on the same day in 2007.

Both infrastructure projects went to Hilmarc’s.

Tengco, however, said he has never seen the bid documents.

For his part, Hilmarc’s official Rogelio Peig said the company merely bidded for the project in accordance with the law.

“Kami po ang lowest bidder which is why we got the contract,” he said.

Vice-President Jejomar Binay, who was mayor of Makati when the building projects started construction, is facing a plunder complaint in connection with the alleged overprice of the building.

His son, Makati Mayor Junjun Binay, and other Makati officials are also included in the complaint.

The two Binays have denied any irregularity in the construction of the allegedly overpriced building. Both declined to attend the Senate hearing on Thursday despite invitations from the panel.

Senator Antonio Trillanes IV said he will push for a bill that will require a video recording of all biddings for government projects worth over P1 million. He said this will ensure that the biddings are not rigged.

He also pointed out that San Lorenzo Tower of the Residences at Greenbelt was built for P2.689 billion, which is nearly the same price as the Makati City Hall building 2 built for P2.2 billion.

Trillanes said the luxury condominium, which was completed in 2009, has 59 floors and 4 elevators. On the other hand, the Makati City Hall building 2 only has 11 floors of which six floors are just carparks.

He also pointed out that the Makati City Hall building 2 has total floor area of 32,000 square meters while the San Lorenzo Tower has 85,100 square meters.

During Thursday’s hearing, another former Makati official testified about the alleged rigging of procurement projects in Makati.

Engineer Ernesto Aspillaga, former Makati councilor and former head of the Makati general services department, said all procurement projects done by Makati went to a favored supplier upon the instructions of then Mayor Jejomar Binay.

He said the notes were handwritten by then Mayor Binay.

He also confirmed that he is facing charges of malversation before the Sandiganbayan following a special audit conducted by Commission on Audit in 2001. At that time, the mayor of Makati was Binay’s wife, Elenita.

Protections for victims of domestic violence