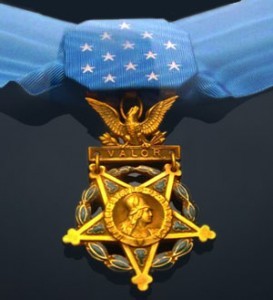 Jose Nisperosâ€™ Medal of Honor (similar to the picture) was finally recovered after a frenetic 90-year search of his great-granddaughter Maria Delilah Turzar after a relative â€œborrowedâ€ it purportedly to help the veteran in his war claims.

Weekend Balita – What are the odds of finding something that was missing for the 90 years? Very remote, I’d say, if not almost impossible. But to the family of Jose Nisperos, a native of La Union in the Philippines, it was sort of a miracle that a his U.S. Medal of Honor which was “borrowed” by a relative purportedly to help in his claims for some veteran’s benefits was returned a few days ago to his great-granddaughter, who never rested a day in her search.

The Medal of Honor was awarded to Nisperos for his extraordinary feat during the Moro Rebellion of the Philippine American War that landed him in the distinguished list of valorous freedom fighters and the first Asian and Filipino to receive the award.

His war saga reminds of the epic Rambo who engaged his nemesis sans the modern war implements that should have Nisperos’mission a lot easier, but less dramatic.

His citation in General Order No. 64 of the United States War Department dated November 25, 1912 describes his heroism as follows:

“For The President of the United States of America, in the name of Congress, takes pleasure in presenting the Medal of Honor to Private Jose B. Nisperos, United States Army, for most distinguished gallantry on 24 September 1911, while serving with 34th Company, Philippine Scouts, in action at Lapurap, Basilan Island, Philippine Islands. Having been badly wounded (his left arm was broken and lacerated and he had received several spear wounds in the body so that he could not stand), Private Nisperos continued to fire his rifle with one hand until the enemy was repulsed, thereby aiding materially in preventing the annihilation of his party and the mutilation of their bodies.”

The Medal of Honor is the nation’s highest medal for valor in combat that can be awarded to members of the armed forces and sometimes referred to as the “Congressional Medal of Honor” because the President awards it on behalf of the Congress.

More than 3,400 Medals of Honor have been awarded to all Department of Defense Services and the Coast Guard as well as to a few civilians “who distinguished themselves with valor” since the medal was first authorized in 1861 for Sailors and Marines, and the following year for soldiers.

Some awardees received the medals sometimes years after their heroic actions have occurred as in the case of 22 Asian-American World War II soldiers who finally received the Medal of Honors only after 60 years after the war when former President Bill Clinton bestowed the belated medals.

Nisperos grew up in San Fernando, in the province of La Union, and was recruited to join the 34th Company United States Army Philippine Scouts Division at the time when the Philippines was a territorial property and colony of the United States and was engaged in a battle together with American colonizers “to suppress the Moro Resistance from 1899 to 1913 in the Southern Philippines.”

He joined the local police force after his service and died in 1922 after a long illness at the age of 34.

Maria Delilah Turzar, the great-granddaughter, was relieved that “after 90 years of praying and hoping, the medal of our great Lolo Jose “ the first Filipino, the first Philippine Scout, the first Asian and the first non-American recipient of the Medal of Honor for valor, the highest U.S. military award” was given back to them as the rightful heirs.