Love for Tacloban Fundraiser in Whittier reaches out

A little over a year after the devastating visit of Supertyphoon Yolanda, Tacloban City slowly rises up from the ashes of destruction like the proverbial phoenix.

The typhoon’s hort visit left behind a toll of destruction never experienced before in such magnitude and one that tested the preparedness of the local and national leadership’s ability to face such formidable challenge.

The grief-stricken families of the more than 6,000 casualties will continue to grapple with the harsh reality for some time to come.

Mayor Alfred Romualdez of Tacloban City, in a fundraising event at the Radisson Hotel in Whittier last March 14,  narrated his harrowing experience at the height of Typhoon Yolanda.

Under his leadership, the rehabilitation and rebuilding efforts for his province continue and he had been to many countries to drum up support for the gargantuan tasks.

With his wife Cristina who is also a councilor of the province, California became a brief stop for the journey and brought with them 10 of the typhoon victims who have been organized into a singing bunch they call Love for Taclo-Band to help them drum up their mission.

The two town executives  had been here twice before to meet the town-mates and seek their support. 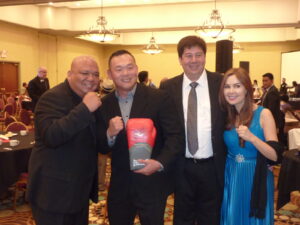 Signed glove for charity: Albert Chang proudly displays a boxing glove with the signature of Manny Pacquiao he successfully bid on as part of the fundraiser in Whittier for the victims of Typhoon Yolanda. Tacloban City Mayor Alfred Romualdez and Councilor Cristina Romualdez flew from Manila for the event organized by Filipino American Chamber of Commerce of Orange County.

The Filipino American Chamber of Commerce of Orange County (FACCOC)  and the GMA Kapuso Foundation, which also an active participant in the rehabilitation of Tacloban City, have themed up to put the event together.

The fundraiser was capped by an auction of a boxing glove signed by Filipino Boxing Manny Pacquiao who could not make it to the event because of his hectic training schedule in preparation for his fight with Floyd Mayweather on May 2 in Las Vegas.

Talking about calamity, here’s one really close to home and affects every Californian.

California is reported to be running out of water, a problem which started before the current drought. Water storage has been on the decline since 2002. Reports have it that satellite data from NASA show that Sacramento and San Joaquin rivers basins were 34 million acre-feet below normal in 2014 considering all of the snow, river and reservoir, water in soils and groundwater combined.

Several drastic steps are already being considered including mandatory water rationing all of California’s water sectors – domestic, municipal, agricultural and industrial. Unless conditions improve, the Metropolitan Water District of Southern California is already considering water rationing this summer. On a happier note, however,  a recent survey revealed that Californians “believe that the drought is serious and support mandatory rationing.”

It’s time to really get serious about water conservation and take the warning to heart.