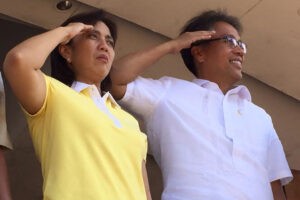 Liberal Party standard-bearer Mar Roxas (right) and Representative Leni Robredo grace the Feast of Peñafrancia celebration in Naga City in Camarines Sur on Friday. Robredo is being urged to run as the administration’s vice presidential candidate for the 2016 elections. (MNS photo)

MANILA (Mabuhay) — The Liberal Party has formally asked Rep. Leni Robredo to be the running mate of its presumptive standard bearer, former Interior Secretary Mar Roxas II, for the 2016 elections.

Robredo, widow of the late Interior Secretary Jesse Robredo, however, said she is still contemplating on whether to accept the offer or not.

Robredo said she will have a final decision before October 12, the filing of certificate of candidacy.

Robredo also said that she posted on her Facebook account a photograph of her late husband with a question “Can I use my lifeline?” The post has been deleted.

She said that she is now feeling the pressure of accepting the offer to run for vice president.

Refran said that in her prayers, Robredo asked a sign from her late husband on what to do.

Robredo earlier said that she has no plans to seek the presidency and is instead contemplating seeking re-election or running for the Senate.

Roxas is in Naga City with Robredo and other members of LP.

The Liberal Party will have a convention on Sept. 28 to finalize the selection of Roxas’ running mate, Caloocan City Rep. Edgar Erice, LP’s vice president for political affairs, said on Thursday.

Erice said the ruling party is unfazed by the tandem of Senators Grace Poe and Francis Escudero because it will have a vice president to nominate when the National Executive Council (NECO) convenes on Sept. 28. (MNS)