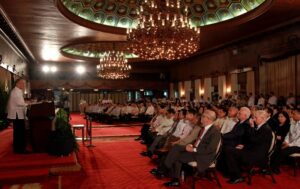 President Benigno S. Aquino III delivers his speech during the ceremonial signing of Republic Act No. 10667 or the Philippine Competition Act and the Amendments to the Cabotage Law at the Rizal Hall of the Malacañan Palace on Tuesday (July 21). (MNS photo)

This was revealed by LP chairman for political affairs and Caloocan Rep. Edgar Erice a day after Aquino’s sixth and last State of the Nation Address (Sona) where the president said that Roxas epitomized the saying “you can’t put a good man down.”

(I think that the President will officially endorse (Interior) Secretary Mar Roxas before this week ends.)

(The President and the party are one in heart and mind that the President’s co-pilot, Secretary Mar Roxas, is the only one qualified to continue the initiatives of the administration.)

The lawmaker said that the administration party believes that Roxas has the “integrity, competence, and experience” to continue the gains of the Aquino administration.

When asked why Aquino stopped short of endorsing Roxas in his swan song to the country, Erice said that announcing Roxas’ endorsement will eclipse the true vision of the Sona which is to report on the achievements of the administration.

(It’s the Sona. It’s all about the achievements of the president and his vision. That should be the one that should be highlighted and not the endorsement.)

In his last Sona, Aquino praised Roxas for withstanding attacks hurled against him.

“To Secretary Mar Roxas: whether you are in or out of government, the enemies of the Straight Path have not stopped criticizing you. Because you count, because your words matter, they have continued to do their best to put you down. Through their constant attacks on your character, your critics themselves have proven that they are afraid of your integrity, skill, and ability to do the job. It’s only because they have nothing to boast of that they’re trying to bring you down. Mar, you are proving: You can’t put a good man down,” Aquino said.

When asked about his opinion on the President’s remarks, the interior secretary said that he will continue Aquino’s legacy.

“If the President will pass the ball to me, I will not only dribble it; I will dunk it,” Roxas told reporters in Filipino on Monday.

Earlier reports said that the LP has a reservation at the historic Club Filipino in San Juan on July 29 to 31. It is said that the administration party will officially announce Roxas’ endorsement there.

Club Filipino has witnessed the oath-taking of late President Corazon Aquino on Feb. 25, 1986 and the announcement of the tandem of President Benigno Aquino III and Roxas on September 9, 2009 as candidates of the Liberal Party for the 2010 elections. (MNS)