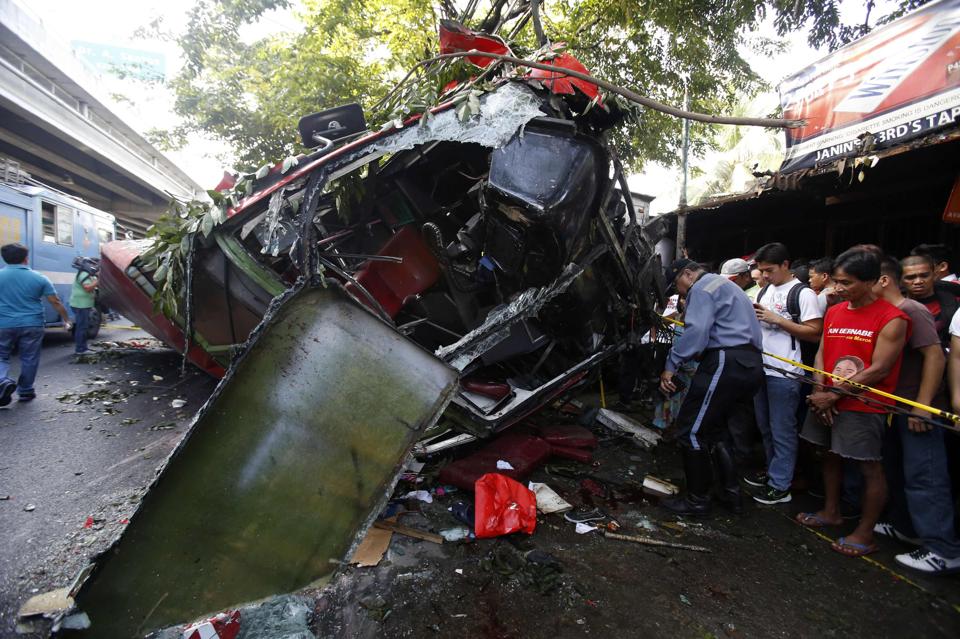 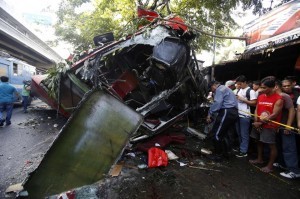 A policeman searches for personal belongings of passengers after a bus fell off an elevated expressway and crashed into a van below in Taguig city, south of Manila December 16, 2013. At least 21 people were killed during the incident, according to the police. (MNS photo)

MANILA  (Mabuhay) – The Land Transportation and Franchising Regulatory Board has issued a 30-day preventive suspension order on a bus firm whose unit figured in an accident that killed 14 people and injured 32 others in Bontoc, Mt. Province early on Feb. 7.

LTFRB chairman Atty. Winston Ginez said the preventive suspension is ordered against the Florida Transport, owner of the bus that plunged into a 116-meter-deep ravine in Barangay Talubin.

The order came after the LTFRB discovered that the license plate (TXT-872) was issued to a bus from Mountain Province Cable Tours, owned by a certain Norberto Cue, Sr.

The Florida bus crash and license-plate fraud came just two months after a horrific fall from the Skyway in Metro Manila of a Don Mariano Transit bus that also had fraudulent identification on its chassis, belonging to another vehicle.

After the Skyway crash, the LTFRB vowed to impose stricter control over passenger buses.

Ginez said during the 30-day preventive suspension, the agency will conduct an investigation to determine if the franchise license of the bus company needs to be revoked, suspended or canceled.