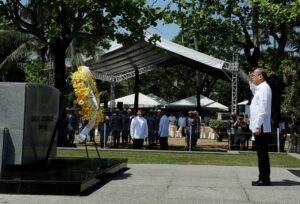 President Benigno S. Aquino III offers a wreath during the inauguration of the Museo ni Emilio Aguinaldo at the Emilio Aguinaldo Shrine in Kawit, Cavite on Friday (March 20). The museum chronicles the life and times of Aguinaldo, especially during the revolution against Spain and war against the United States. (MNS photo)

MANILA (Mabuhay) – The Land Transportation Office has waived the 150-day validity period of temporary driver’s licenses until a shortage of materials for license cards is resolved.

LTO enforcers and deputized agents were instructed to refrain from apprehending drivers with expired TDLs.

Licensing Centers/District Offices and Driver’s License Renewal Centers (DLRC) will set-up hotlines and notices to inform the public of the card’s availability. (MNS)

How to make Filipino foods healthier