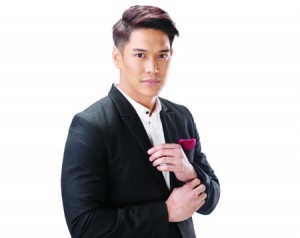 Thirty-four-year-old Luis Alandy challenges his range as an actor in the afternoon soap opera “Innamorata.”

Apart from playing leading man to Max Collins, who is 13 years younger than him, he will also have to work alongside Michael de Mesa, one of the more respected actors and directors in Philippine show business.

Luis considers his role in the series a breath of fresh air.

In “Innamorata,” Luis is Edwin Manansala, a former TV commercial director who had gone blind. He is tasked by his father Lloyd (Michael) to help in the family’s shoe factory. He will meet Esperanza (Max ) and they will become good friends, sharing a liking for the poem “Innamorata.” Edwin will then gave Esperanza a music box, which she will consider a gesture of love. But Lloyd will end their friendship, eager as he is to pair his son with aspiring actress, Gina played by Jackie Rice.

For Luis, “Innamorata” is a good learning experience as it teaches him about the pain brought about by discrimination. He also finds Esperanza’s “good disposition” quite inspiring and contagious.

So how is it working with Max?

“She’s open to suggestions,” he related. “I enjoy working with her. We communicate a lot and she asks questions about our scenes. She doesn’t assume that she knows everything and she’s not selfish.”

If Luis Landy’s been consistently getting good roles, it is because of his solid work ethics, and his apparent consistency in putting premium in his performance whether as lead or support. In fact, he believes these reasons paved the way for his inking a five-year deal with GMA.

“I think I’ve earned their trust naman sa akin. I’ve been working with them for seven years already and they’ve always entrusted me with good roles like in ‘Broken Vows’ and ‘My Lover, My Wife,’” he intimated.

His good fortune as an actor, has allowed Luis to pay it forward to children in need. He has donated books and school supplies to the Cradle of Joy Foundation last Feb. 12 as part of his 34th birthday celebration.

He gave book shelves, storybooks, coloring books and crayons to nursery students of the said foundation. His reason is simple: he values education and he wants to inspire the students to study hard for their future.

Zsa Zsa, Dolphy no longer no longer keen on marriage