Luis, Angel asked: Getting back together? 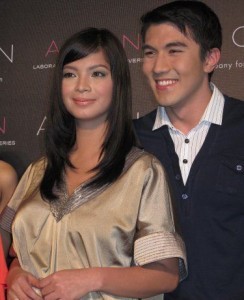 Luis Manzano and Angel Locsin, who both recently separated from their respective partners, prefer to keep mum on the possibility of getting back together, four years after their split.

The 32-year-old TV host did not give a direct answer when asked on his ties with Locsin, explaining it may complicate matters.

The 28-year-old actress recently separated from her boyfriend of over a year, football player Phil Younghusband. Locsin confirmed the breakup in late October. They became a couple in May 2012.

Coincidentally, Locsin and Manzano confirmed their breakup in October of 2009, four months after their actual separation.

Asked on the possibility of getting back together with Manzano, Locsin similarly put off giving a direct answer.

“Baka ‘yon po ang hindi ko masagot sa ngayon. Sa ngayon po, I’m very happy doing what I love most and helping people out,” said Locsin, who at the time was taking part in the relief efforts of Philippine Red Cross for the victims of the recent typhoon.

Eula Valdez: ‘As an artist, it’s okay to go crazy with your choice of projects’