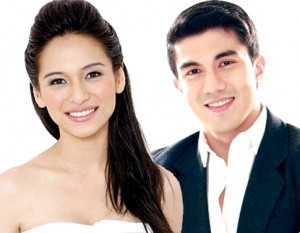 The issue started when Jennylyn was spotted talking to Luis at the location of the latter’s weekend program.

According to Luis, it’s true that the actress paid him a visit but there is no display of affection coming from both of them.

“Meron lang inihatid sa akin si Jen at nagkataon lang na since nandun naman siya, kilala naman niya sina Billy (Crawford), pinilit ko na siyang bumaba just to say hi man lang (Jen brought me something and it so happen that she’s there, and she knows Billy, I asked her to come down and greet everyone).”

Jennylyn then went on with Luis’ request, but only stayed in the said area not longer than 10 minutes.

“Ni wala nga siyang nakita kahit isa sa staff. Pumasok siya within the area pero sa mismong studio hindi talaga (She haven’t seen any staff of the show. She went in the area but not in the studio).”

“One thing kasi hindi po kami nagpi-PDA. Siguro if I help a lady up, yung rampa sa likod, of course I have to hold the lady, baka iniisip nila PDA na agad yung ganun, aalalayan mo yung likod o aalalayan mo siya paakyat ng kotse (We are not doing any PDA. If I helped a lady, and hold her at the back, and people might think it’s already PDA, it’s just a way of helping her get in the car).”

On reports that the two of them were seen kissing outside the venue, Luis said what they both shared was just a peck on the cheek.

“Well, if you consider beso kissing. Hindi ko siya ilalalagay sa ganong predicament (I won’t put her in that predicament).”

Luis added that he’s still dating Jennylyn and there’s no official label yet on what they both share.

“I will be very honest, hindi kami. We are still dating. I donâ€™t see the point of covering up and Iâ€™m not going to expound on things.”

The TV host reiterated that he will only answer questions like this to defend Jennylyn because it would be very unfair on her part when she did not do anything wrong.(MNS)