Luis Manzano stands with Angel Locsin in Lumad cause 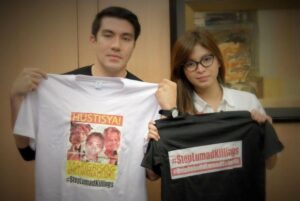 Angel Locsin has convinced her boyfriend, actor and TV host Luis Manzano, to join her crusade for justice for the recent murders of two Lumad leaders and a civilian companion in Lianga, Surigao del Sur.

Or, at the very least, she managed to make him hold up a statement shirt in support of the cause and pose for the photo above, which was posted on Facebook late Monday by Angel’s sister, Angela Colmenares-Sabino.

Beside Luis, Angel holds up the back of a black shirt with the hashtags “#StopLumadKillings” and “#HelpRebuildLumadSchools”.

Unlike Angel, Luis, the eldest son of movie queen and Batangas governor Vilma Santos-Recto, has yet to make a statement about the murders.

The murders were allegedly committed by paramilitary forces backed by officials of the Armed Forces of the Philippines and are being linked to other atrocities against indigenous people in Mindanao.

Aside from Angel, Aiza Seguerra and actress-writer-director Bibeth Orteza have also joined the call for a stop to Lumad killings.

Angel is a relative of Bayan Muna party-list representative Neri Colmenares and has endorsed his senatorial bid for the national elections next year. (MNS)

Lea Salonga talks about resuming dreams once pandemic is over