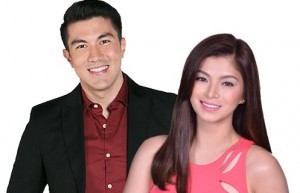 Luis Manzano has finally spoken about the health condition of his girlfriend Angel Locsin, who backed out of the upcoming Darna movie after developing a disc buldge in her spine.

Manzano said he was saddened by Locsin’s decision but health will always be the priority.

“Napakaraming mga Kapamilya ang naghihintay na suotin niya uli ang costume at makipagbakbakan siya uli bilang Darna. For me as her boyfriend and as a fan, the fact that she cannot fly again as Darna, nakakalungkot,” he said.

Manzano said he has seen the actress in extreme pain because of her condition.

“Dati ko pang alam na may problema ang likod niya. Paminsan-misan masama ang sumpong, minsan naman okay. In fact, there was one time, two months ago. I think lumabas naman sa news na na-confine siya. Nasa Batangas ako. I was diving and then I got a call that she was being rushed to the hospital. Talagang kinansel ko ‘yung dive, punta agad ako. She was in extreme pain,” he said.

Asked how he shows his support for Locsin amid this setback, Manzano said: “I always tell her the world does not end with the Darna role. There’s so much more that could happen para sa kanya, bigger things would come. I know ABS and Star Cinema will give her something bigger, something fulfilling as an actress.”

Meanwhile, the actor said the actress who will be chosen to play Darna has very big shoes to fill.

Manzano said the actress who will be playing the Filipino heroine “should understand the responsibility of portraying Darna.” (MNS)

Angelica in love: I deserve this