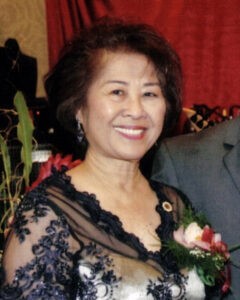 Lydia was born in Taal, Batangas to Public School Supervisor Marciano Kasilag Solis and First Grade Teacher, Pacita Vergara Solis. After graduating as high school valedictorian, she was sent to the United States as one of the eleven scholars of the AFS or American Field Service Scholars.

As a community leader, she is currently the Public Relations Officer of the Philippine Independence “Kalayaan” Committee, and an active officer in community organizations such as: the Philippine Heritage Institute and the Jose P. Rizal Monument Movement.

As an active media practitioner here in LA, Lydia was the former President of the Philippine Press Club International and former Treasurer of the Filipino American Press Club of Los Angeles, Inc. (1978). She was married to former LAPD Narcotics Lieutenant Clarke A. Wardle, Ph.D. who passed away in 2011.

In her acceptance speech during their recent Induction ceremonies at the Sheraton Cerritos on March 14th, Lydia Vergara Solis delivered a very powerful message:” More than ever, we bond with other Philwomenians globally and the entire PWU community – its administration, faculty and student body in an effort to preserve our legacy of quality education as we draw nearer to our 100th Anniversary and to honor what Tita Helen’s parents, Francisca Tirona Benitez and Dean Conrado Benitez have bequeathed to us, their alumna.”

Indeed, as the new President of PWUAASC, Lydia’s message resonates not only in her capacity to lead but her virtue as a woman of substance. Congratulations Lydia, more power to you!

Bill mandates use of PHL-made materials in public construction work

Dominican gets 25 months for illegally reentering the U.S. after deportation