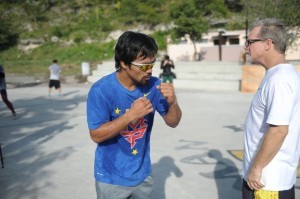 Manny Pacquiao (left) trains with his mentor Freddie Roach for his clash against Brandon Ríos on Nov. 24 (No. 23 in U.S.) in Macau. Photo Credit: Denmark Dolores

SINGAPORE  (AFP) – Manny Pacquiao’s trainer Freddie Roach said he would order the Filipino boxing great to retire if he suffers a bad loss in next week’s comeback fight against Brandon Rios.

The flamboyant Roach backed Pacquiao for a fifth or sixth-round knockout of the American in their November 24 World Boxing Organisation welterweight title bout in Macau.

But if the fight does not go according to plan, he said he would have no hesitation in telling Pacquiao to quit the sport after what would be his third straight defeat.

And Roach, a former boxer who suffers from Parkinson’s disease, said they had an “agreement” that Pacquiao would retire if advised to by his trainer.

“If I see he is slowing down and slipping in the fight I will be the first one to tell him,” Roach told journalists via conference call from Pacquiao’s training camp in General Santos City, the Philippines, late on Wednesday.

“We have an agreement that I will tell him that and he will retire. I don’t see him slipping in the gym at this moment and he’s doing really well. He’s fired up and anxious to get back in the ring and I see good things.

“If things don’t go well we will talk about retirement and going into politics full-time or something like that.”

Pacquiao, who is nearly 35 and was regarded as one of the best pound-for-pound boxers of his generation when he won world titles in eight weight divisions, has not fought in nearly a year since he was knocked out by Mexico’s Juan Manuel Marquez in the sixth round in Las Vegas last December.

Pacquiao’s build-up to the “must-win” fight with Rios has been disrupted by super typhoon Haiyan, which killed thousands of people and left hundreds of thousands homeless when it swept through central regions of the Philippines.

But Roach said he had told Pacquiao, who is a member of congress, that it was impossible to take time out of training to visit survivors and survey aid efforts in the affected areas.

“He told me he wanted to go down on Sunday but it’s too close to the fight for him to take any time off and we talked about that,” Roach said. “He is focused on the fight still but obviously it is a big distraction because it killed all of those people.

“We do talk about it in the gym – about how many people got killed in the storm and how many more have been affected. He is concerned about it yes, very much, but I think we have him pretty much on track on the fight.

“They seem to be inspiring each other.”

He said if Pacquiao wins in Macau, they will seek a rematch with Marquez as a priority ahead of the long-awaited match-up with undefeated American Floyd Mayweather.

“We want Marquez one more time, yes. That’s the fight we want,” he said. “Mayweather too of course, but Marquez, he got lucky and we want to take that back.”

Pacquiao wraps up his training camp and departs for Macau on Monday, ahead of the fight which will be held next Sunday morning local time so as to be live for Saturday evening TV audiences in the United States.