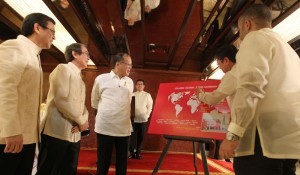 MANILA (Mabuhay) – The Palace said it is committed to prosecuting those involved in the multibillion-peso housing scam allegedly perpetrated by detained businessman Delfin Lee during the previous administration.

I certainly know that this government is committed to prosecuting those involved in the housing scam. Let us know who this person is baka puwede pang isama sa kaso,” Presidential spokesman Edwin Lacierda said in press briefing in Malacanang on Wednesday.

With regards to the planned inquiry of the House of Representative on the housing scam and the possible participation of some officials from the previous administration, Lacierda said it’s up to the House leadership to conduct the investigation.

“It’s within their jurisdiction to choose, if they choose to do so. I remember there was already a Senate investigation on the housing issue. If the House would prefer to also conduct their own investigation, of course, it is their prerogative to do so.”

The House’s majority bloc received an authority to conduct a probe on the multibillion-peso housing scam.

Lee is the owner of Globe Asiatique Holdings Inc., which allegedly used “ghost buyers” to get close to P7 billion in loans from the Pag-Ibig Fund from 2008 to 2011. (MNS)