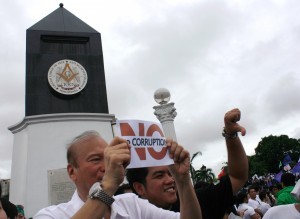 Former Senator Ramon Magsaysay Jr.,carrying a “No Corruption” placard join in the One Million March to the Rizal Park in Manila on Monday, August 26, 2013. (MNS photo)

MANILA  (Mabuhay) – Malacañang has hit United Nationalist Alliance (UNA) for implying that the special purpose funds under the Office of the President would only be used by Department of Interior and Local Government (DILG) Secretary Manuel ‘Mar’ Roxas for his 2016 presidential campaign.

In a briefing on Monday, Presidential Spokersperson Edwin Lacierda said the funds would be used for President Benigno Aquino III’s projects and not by Roxas.

He said the special purpose funds would be utilized for DILG’s Salintubig, which would provide clean water for municipalities that do not have access to this resource, and for the rehabilitation of areas that were under armed conflicts.

The special funds would also be used by the Sagip-buhay project, which would relocate informal settlers.

Lacierda said it is sad that it is Vice President Jejomar Binay’s own party who leads in criticizing Aquino’s programs.(MNS)