Malou Zagala-Toler recently won the “Overall Performer” Award from the Malibu Music Festival. She calls herself an acoustic singer yet she can sing just about anything with her guitar, including folk, R & B and rock.  Her idols since she was growing up were: Tina Turner,Cheryl Crow, Joan Baez, Jamis Joplin, Melissa Etheridge and Joan Jette.

At a young age of 9, Malou Lobos Zagala began singing at St. Bridget’s Elementary School in Cubao, Quezon City where she sang with the choir. and in high school, at St. Joseph’s College, she used to sing at a nearby restaurant/bat after school where her classmates would applaud her for her performances.

Malou’ s tenacious perseverance on her music career was assisted by a sister who showed her how to play the guitar and off she dropped out of school to pursue her dreams and went on her own, singing at various Clubs in Malate until she was one day discovered by a talent agent to go on a singing tour in Japan, which was short-lived . 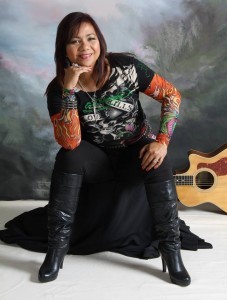 Though her home base was singing at the Hotel Intercontinental in Manila, she also had stints at the Hyatt Hotels in Malaysia, Singapore, Thailand and Qatar. But, as luck would have it, she was sent to sing at the Hyatt Hawaii in 1997. Thius became her steppig stone in coming to the US where she finally met her husband, sound engineer of their Band,  Carlton Toler..

Malou’s  growing fan base makes her a promising artist in well known venues such as the House of Blues and Whisky A Go Go where she has also performed recently.

Though a realtor by profession during the day, Malou has also been promoting her “Pinoy “Got Talent” shows along with partner Noli Yu every first Saturday of the month.  Catch their end of season show on February 8, 2014 at the Kapistahan Restaurant on Temple. Avenue in Los Angeles and you’ll find yourselves mesmerized by her exciting performance. Let us all support Malou, one of our Pinay pride here in LA for gradually making a name for her herself in the music industry. Mabuhay Malou, we’re all here to support you!